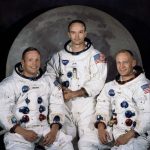 When the Apollo 11 crew landed on the moon, the world waited with unbridled excitement to view the moon rocks they were bringing back. It was an unprecedented event. Never before had man been able to look upon these space rocks. Soon, the astronauts would be treated to a ticker tape parades, and of course, the world tour to tell of their amazing escapades.

However, before all that, the astronauts had to do something that every world traveler understands…go through customs. What??? When I read that, I was stunned. Why would they need to go through customs? It’s not like they went shopping on the moon. Then again, they did bring back something they didn’t take with them…moon rocks, moon dust and other lunar samples, according to the customs form filed at the Honolulu Airport in Hawaii on July 24, 1969…the day the Apollo 11 screw splashed down in the Pacific Ocean to end their historic moon landing mission. Nevertheless, NASA had those almost immediately, didn’t they?

Apollo 11 astronauts Neil Armstrong, Buzz Aldrin and Michael Collins hd to declare the things they brought back, just like everyone else, and they had to declare not only their cargo, but also had to list their flight route as starting Cape Kennedy (now Cape Canaveral) in Florida with a stopover on the moon. Then all three men had to sign the form, so everything was legal.

The form was posted to the U.S. Customs and Border Protection Web site in 2009, to mark the Apollo 11 mission’s 40th anniversary. A copy was obtained by SPACE.com and verified by NASA. John Yembrick told SPACE.com that it was indeed authentic, was a little joke at that time, and maybe it was, but the reality is that not much has changed over the years. The big joke was the fact that because Apollo 11 splashed down 920 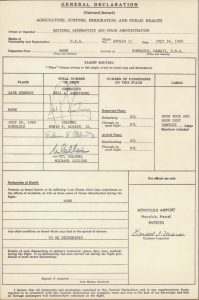 miles southwest of Hawaii and 13 miles from the USS Hornet, the Navy ship sent to recover the crew. It took two more days for the astronauts to actually return to Hawaii on July 26, where they were welcomed with a July 27 ceremony at Pearl Harbor. So customs was a bit delayed.

Still, the astronauts were trapped inside a NASA trailer as part of a quarantine effort. The concern was the possibility of germs they might have picked up. They had to wear special biological containment suits when they walked out on the deck of the USS Hornet after being retrieved. Then, NASA transported them to Houston, quarantine trailer and all, and they emerged from isolation three weeks later. Today’s returning astronauts exit their spacecraft almost immediately. Some, who have been in space a long time receive medical checks after spending months in the weightlessness of space. Nevertheless, today’s NASA astronauts still have to go through customs, and I still find that quite funny.