A number of years ago, I requested my dad, Staff Sergeant Allen Lewis Spencer’s military records from the National Personnel Records Center (NPRC) in Saint Louis, Missouri, only to be told that the records had been destroyed by a fire in 1973. I hadn’t heard about this before, and so really knew nothing about the details, except that I would never be able to find any more records of my dad’s military service during World War II, other than the ones we had, which was comparatively little. I wondered how it could be that the only military records for all those men were stored in one building, with no back up records. I know computers were not used as often, but there were things like microfiche back then. Nevertheless, the records were lost…and the loss felt devastating to me.

When I heard about the fire that destroyed my dad’s records, it all seemed like the distant past, but in reality, it was during my high school years. Then, it just seemed like a bad dream…a nightmare really. I couldn’t believe that there was no way to get copies of those records. My dad’s pictures, one of which was signed by the pilot of Dad’s B-17, on which Dad was a top turret gunner. Those pictures and the few records are all we have of his war years, and to this day, that makes me sad.

The fire broke out on July 13, 1973 and quickly engulfed the top floor of the National Personnel Records Center (NPRC). In less 15 minutes from the time the fire was reported, the first firefighters arrived at the sixth floor of the building, only to be forced to retreat as their masks began to melt on their faces. The fire was that hot!! There was just no way to successfully save the documents that were stored there. The fire burned out of control for more than 22 hours…even with 42 fire districts attempting to extinguish the flames. It was not until five days later that it was finally completely out. Besides the burning of records, the tremendous heat of the fire warped shelves while water damage caused some surviving documents to carry mold. 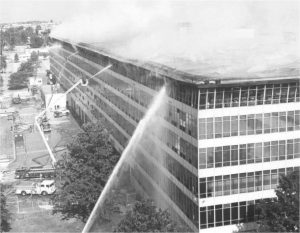 About 73% to 80% of the approximately 22 million individual Official Military Personnel Files stored in the building were destroyed. The records lost were those of former members of the U.S. Army, the Army Air Force, and the Air Force who served between 1912 and 1963. My dad joined the Army Air Force on March 19, 1943 and was discharged October 3, 1945. Many of the documents lost were from those years. They were gone, and there was no way to get them back. The National Personnel Records Center staff continues to work to preserve the damaged records that ere saved. There were about 6.5 million records recovered since the fire.

One Response to A Devastating Loss