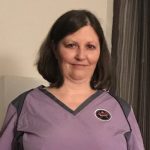 The last year has been a whirlwind of change for my daughter, Corrie Petersen. Eight months ago, she left a job that should have had room for advancement, but simply didn’t for her position…it was a dead-end job for Corrie. Never one to give up, Corrie took future in her own hands, with much prayer and guidance from God, she went back to school to obtain the future career that she knew was the calling of her heart…nursing. She began her big job move by going through the CNA training at Shepherd of the Valley nursing home, and once she was a CNA, she began her search for a job change. Upon being hired at Elkhorn Rehabilitation Hospital, she left her dead-end job. Coming from 13 years of taking part in the caregiving process for both sets of her grandparents, Corrie went into the decision to become a nurse, with her eyes wide open. I think that lots of people try going into nursing, only to find that it isn’t for them. Nurses, CNAs, and aides do a lot of personal care tasks that are less than pleasant sometimes. If you don’t have a heart for nursing, it will be a very difficult…but Corrie has a heart for it, and has become a dedicated CNA, who is well on her way to being a nurse. The fall will bring nursing school for Corrie, and she can hardly wait. I am so excited for her.

When we think of job promotions, we don’t generally expect them to happen within the first three months, but that is exactly what happened with Corrie. Since she is a very experienced CNA, even thought she has only been working as a CNA for eight months, Corrie’s supervisors quickly saw the value she brought to their facility, and she has been promoted to lead CNA for her shift, as well as Trainer fit new hires. Both are big honors for a girl who has been on the job less than a year. She is also “laddering up,” which puts her at a higher level of training, making her much more valuable to Elkhorn Rehab Hospital. It is my understanding that they have never had a CNA ladder up, which Corrie was very surprised to find out. So I guess you could say she is making history at work.

Probably the biggest news of the year…and her lifetime, was the addition of their new baby granddaughter on May 30th of this year. Next to motherhood, grandmotherhood is about the greatest experience that comes from getting older. Not that Corrie is old at all, especially when you consider that we, her parents are now great grandparents. This baby is such a sweet, good natured little girl. Corrie and her husband, Kevin enjoy every single minute they get to spend with her. I know they would like to spend lots more time, but her family is a 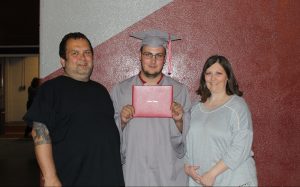 big one, so we all have to share. Corrie is feeling so very blessed these days. Having a grandchild is the greatest thing ever, and for Corrie and Kevin, a granddaughter is amazing, because they never got to have a daughter, and they wanted a girl too. And, to top it off, they get to share a birthday of sorts, because hr granddaughter is one month old today. And in addition, having a job you really love..well, as the saying goes, “find a job you love, and you’ll never have to work a day in your life.” Now, I don’t think that Corrie would say that her job isn’t work, but it is work she loves, and that makes all the difference. Today is Corrie’s birthday. Happy birthday Corrie!! Have a great day!! We love you!!