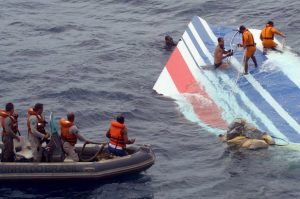 On June 1, 2009, Air France Flight number 447 went down in the Atlantic Ocean. The flight took off from Rio de Janeiro on May 31, 2009.It was on it’s way to Paris, but nose-dived into the ocean long before reaching it’s destination. All 228 people on board were killed. A combination of bad weather, pilot error, and the captain’s extra-marital affair contributed to the deadliest crash in Air France history. Junior co-pilot Pierre-Cedric Bonin, 32, was piloting the Airbus A330 when it hit a thunderstorm over the sea. Bonin and fellow co-pilot David Robert, 37, pitched their craft sharply up instead of down, a fatal error that caused the plane to stall and and then pitch down, leading to the nose-dive into the ocean. Complicating the situation, Marc Dubois, the 58-year-old captain, had left the cockpit to take a nap, because he had been up all night with his mistress, and by the time he returned, it was too late to avoid catastrophe. Dubois had more than 11,000 flight hours compared to Bonin, who had logged a little less than 3,000.

Dubois and the rest of his crew had arrived in Rio three days before Flight 447’s departure. The probe’s lead

French investigator believes that the pilot, Dubois could have properly navigated the storm, but he was napping. “If the captain had stayed in position . . . it would have delayed his sleep by no more than 15 minutes, and because of his experience, maybe the story would have ended differently,” chief French investigator Alain Bouillard said. A search was quickly organized, but the plane sank to the ocean floor and wasn’t found for nearly two years. An oil slick thought to have been left by the downed Air France flight was spotted on June 3, 2009. Search and rescue was the toughest part in trying to solve the mystery of Flight 447’s disappearance over the Atlantic Ocean back on June 1st, 2009. Some wreckage was found a few days after the crash, but the probable cause couldn’t properly be determined until they found the black box, which took was about two years later. Of the bodies of the 228 passengers and crew, 74 remain lost in the water after the search 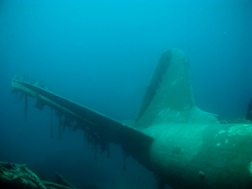 was finally called off.

When the black box was finally found, the investigation into the crash could really begin. Flight 447 was going from Rio de Janeiro to Paris when it encountered a thunderstorm. It is now believed that the probable cause was a disconnect from autopilot due to ice crystals in the pitot tubes. With an aerodynamic stall, the crew couldn’t recover and eventually it led to the plane falling into the ocean. The inexperienced pilots did what most people would have in a stall, they pulled up. This only made the situation worse. By the time the experienced pilot got to the cockpit, it was too late to save the plane.

One Response to Nose-Dive