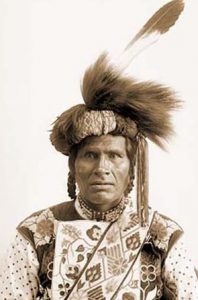 Many people think of the Indians as, well…simply the Indians, whether we intend to or not. I suppose that if we studied the different tribes, their noticeable differences would become very apparent, but if we don’t it’s not so easy to tell them apart. One of the lesser known tribes, at least early on in American history, was the Chippewa tribe. Speculation is that they were already settled in a large village at La Pointe, Wisconsin at about the time that America was discovered. Then, in the early 17th century, they abandoned this area. Many of them returning to their homeland in Sault Sainte Marie, Michigan, while others settled at the west end of Lake Superior, where they were found by Father Claude Jean Allouez, a Jesuit missionary and French explorer, in 1865.

The Chippewa, also known as the Ojibway, Ojibwe, and Anishinaabe, are one of the largest and most powerful nations, having nearly 150 different bands located primarily in Minnesota, Wisconsin, Michigan, and southern Canada…especially Ontario, Manitoba and Saskatchewan. Ojibway means “to roast till puckered up.” It’s an odd name that referred to the puckered seam on their moccasins. Formerly, the tribe lived along both shores of Lakes Huron and Superior, extending across the Minnesota Turtle Mountains and North Dakota. They were strong in numbers and occupied an large territory, but the Chippewa were never prominent in history, mainly because of their remoteness from the frontier during the period of the colonial wars. They were part of an Algonquian group, including the Ottawa and Potawatomi, which divided when it reached Mackinaw in its westward movement.

Sault Saint Marie was their main headquarters about 1640, as mentioned by Jean Nicolet de Belleborne, a French-Canadian woodsman, who called them Baouichtigouin, meaning “people of the Sault”. In 1642, they 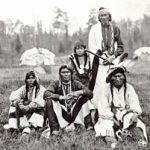 were visited by missionaries Charles Raymbaut and Isaac Jogues, who found them at the Sault and at war with a people to the west, who were probably the Sioux. Because they kept to themselves, away from the frontier, the Chippewa took a very small part in the early colonial wars, but the southern division of the tribe was known to be of warlike disposition. Those to the north of Lake Superior were considered to be peaceful. They were termed by their southern brothers as “the rabbits.” In the north, the members of the tribe were described as the “men of the thick woods” and the “swamp people,” terms used to designate the nature of the country they lived in.

The Chippewa people living south of Lake Superior in the late 1600s were fishermen and hunters. They also grew corn and wild rice. Their possession of wild-rice fields was one of the chief causes of their wars with the Dakota, Fox, and other nations. At about this time, they came into possession of firearms, and began pushing their way westward, in a mixture at peace and war with the Sioux but in almost constant conflict with the Fox tribe. The French, in 1692, reestablished a trading post at Shaugawaumikong, now La Pointe Island, Wisconsin, which became an important Chippewa settlement. In the beginning of the 18th century the Chippewa succeeded in driving the Fox, already reduced by war with the French, from north Wisconsin, compelling them to take refuge with the Sac. 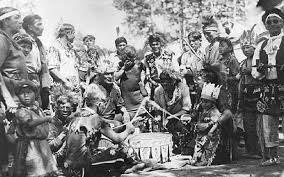 the close of the war of 1812. Those living within the United States made a treaty with the Government in 1815, and afterwards remained peaceful, residing on reservations or allotted lands within their original territory in Michigan, Wisconsin, Minnesota, and North Dakota. By 1900, the Chippewa were estimated to number about 30,000. Today, the collective bands of Chippewa or Ojibwe, are one of the largest groups of Native American People on the North American continent. There are communities in both Canada and the United States. In Canada, they are the second largest population among First Nations, surpassed only by the Cree. In the United States, they have the fourth largest population among Native American tribes, surpassed only by the Navajo, Cherokee and Lakota Sioux.