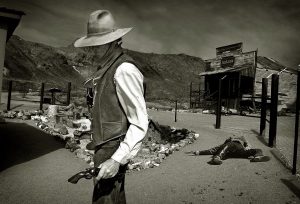 When we think of the outlaws of the old west, the term “gunfighter” or “gunslinger” were not the terms used to describe those men, or even the lawmen that some of them became upon changing their ways. They were actually originally called pistoleers, shootists, bad men, or one we do know…gunmen. That being said, Bat Masterson, who was a noted gunfighter himself, who later became a writer for the New York Morning Telegraph, sometimes referred to them as “gunfighters,” but, more often as “man killers.”

I suppose that Bat Masterson was probably the one who coined the term “gunfighter” in the first place, but many people from that era must have thought it an odd term to use. Still, if you heard an outlaw called a pistoleers, wouldn’t you have wondered what that was supposed to be? I would have, but then I would have looked it up and found that a pistoleers was “a soldier armed with a pistol.” That would have made no sense to me either, but in reality, some of the outlaws were soldiers who didn’t want to fight for a cause they didn’t believe in, so their deserted and headed west, so I guess they could have been pistoleers.

Another “movie mix-up” that happened is that in the old west, pistoleers or shootists didn’t squarely face off with each other from a distance in a dusty street, like they would like us to believe. In reality, the “real” gunfights of the Old West were rarely that “civilized.” Many fought in the many range wars and feuds of the Old West, which were far more common that the “stand-off” gunfight. Most of these were fought over land or water rights, some were political, and others were simply “old Hatfield-McCoy” style differences between families or in lifestyles. These people fought from the protection of anything available like a watering trough, a wall, building, or even a horse. Of those that more easily fit the perception of the “gunfighter,” you would find that they didn’t kill anywhere near the number of men they are credited with on television. In many instances their reputations stemmed from one particular fight, and the rumors grew from there, making people think they were that good. In other cases, self-promotion led people to believe they were lethal shootists, such was the case with Wyatt Earp and Wild Bill Hickok.

There were other, lesser known shootists, who actually saw just as much, if not more action than their well-known counterparts. Men like Ben Thompson, Tom Horn, Kid Curry, Timothy Courtright, King Fisher, Scott 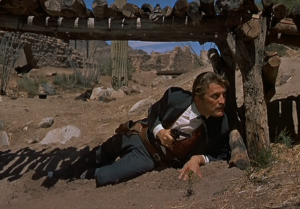 Cooley, Clay Allison, and Dallas Stoudenmire, just to name a few, were often not credited for nearly the shooting ability of the well known shooters. Often these gunfighters, whose occupations ranged from lawmen, to cowboys, ranchers, gamblers, farmers, teamsters, bounty hunters, and outlaws, were violent men who could move quickly from fighting one side of the law to the other, depending on what suited them best at the time. Though many of these gunman died of “natural causes,” many died violently in gunfights, lynchings, or legal executions. The average age of death was about 35. However, of those gunman who used their skills on the side of the law, they would persistently live longer lives than those that lived a life of crime.