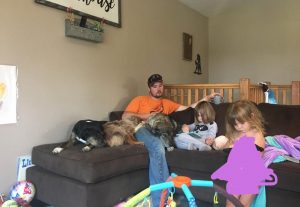 When my nephew, Eric Parmely was little, I would never have guessed that he would decide to become a farmer. Eric was born a city boy, and lived in town throughout his childhood. He rode motorcycles, worked on cars with his dad, and did all the typical things at city boys did. Then, when Eric met Ashley, everything changed. Ashley was a country girl, and loved all the farm animals…especially horses, and especially miniature horses. The reality was that Eric was so smitten with Ashley, that wherever Ashley was going, Eric wanted to go… 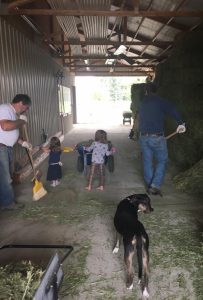 Over the next seven years I watched as Eric became more and more a country boy…well, a country man. He loved having room to spread out and play with his kids, and have as many farm animals as he and Ashley could possible want. They raise goats, cows, guinea pigs, ducks, chickens, horses, dogs, cats…and kids!! Their two daughters, Reagan and Hattie and a great help around the farm, and no job grosses them out. I know their son, Bowen will soon grow up to be a great help too, but for now he gets to go along for the ride. Bowen likes that just as much as the girls like the work, for now. 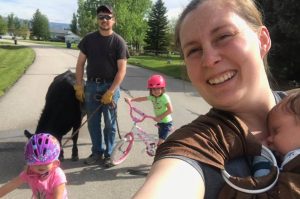 Eric has worked for Halliburton for some time now, and is often out of town with his job. That is always tough on the family. Kids need both parents to be around, but at least the kids know that their daddy will be home soon. Eric is a hard worker, and when the bottom dropped out of the oil industry, Eric was able to keep his job. That is important, because he has a family to support. We are all very glad that his job was saved, but sorry that his work is so far away. We are also hoping that very soon, Eric’s job will bring him back home to work. Today is Eric’s birthday. Happy birthday Eric!! Have a great day!! We love you!!