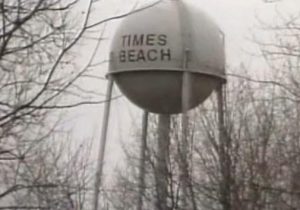 As people prepare for Christmas, their days are busy shopping for gifts, and buying things for Christmas dinner. Their minds are on friends, family, and the coming holiday…not disaster. On December 23, 1982, disaster came in the form of a chemical…dioxin, which had been sprayed on the unpaved roads in the town of Times Beach, Missouri. On the 23rd, just two days before Christmas the Missouri Department of Health and the federal Centers for Disease Control (CDC) informed the residents that their town would have to be evacuated. They were told that not only would their town have to be evacuated, but it would also have to be demolished. It was a nightmare Christmas for the people of the town of about 2,000 people. These were their homes, and now the government was telling them that they had to leave. Sure they were offered money, and a chance to relocate somewhere, but some of the residents had lived there all their lives. They just didn’t want to leave. Some refused to sell. By February, the federal and state governments had spent $36 million to buy every house in town except one. Eventually, in 1985, there was only one couple left living in the town, George and Lorene Klein. People magazine profiled their last stand. “They wanted more money,” Leistner says. “She still blames me. I didn’t set the price, but it’s my fault. She doesn’t speak to me.” In 1985, the city was officially disincorporated.

Originally founded in 1925, Times Beach was actually part of a newspaper promotion: A 6-month subscription 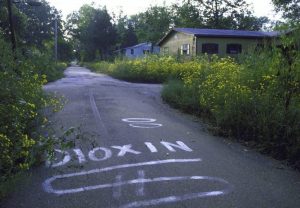 to The St. Louis Times plus an extra $67.50 bought a 20-by-100–foot lot along an unsettled stretch of the Meramec River. The town never became the booming resort that the newspaper had intended it to be, but rather, it evolved into a lower-middle–class hamlet of about 2,000 people. It was located just off Route 66, the now famous two lane highway that ran from Chicago to Los Angeles, and was once was one of the major routes across the American Southwest. Unfortunately, being the small town that it was, Times Beach never had the money to pave its roads, and all the dust that was kicked up by vehicles was a real nuisance. In 1972, town officials thought they’d found a perfect solution to the problem: they paid local waste-hauler Russell Bliss just 6 cents per gallon to spray its roads with oil. The plan was to basically glue the dust to the ground, but we all know about the best laid plans. They had hoped the oil mixture would mix with the dirt and somehow glue it down. They never anticipated the problem the “cheaper solution” would cause.

Bliss got the oil for free the year before, when a chemical manufacturer that had made most of its money selling napalm to the military paid him to get rid of its waste materials. He mixed six truckloads of that waste…which turned out to be hexachlorophene tainted with dioxin, a dangerous chemical that, once absorbed, can remain in the human body for more than 10 years–with a tankful of used motor oil. Next, he sprayed this carcinogenic cocktail all over town. The children of Times Beach loved sliding around in Bliss’ purple-tinted goo, 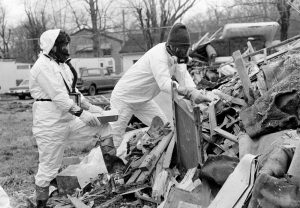 and no one gave the substance a second thought until animals…particularly horses, who had contact with Bliss-sprayed roads and barn floors and riding rings every day, all year round…started dropping dead. Soon people started to get sick, too. In 1979, the EPA came to town and took soil samples, and in 1982 the agency announced that the levels of dioxin, “the most potent cancer-causing agent made by man,” in Times Beach were off the charts. The agency evacuated the town just after Christmas. In all, the agency spent $250 million and incinerated 265,000 tons of dioxin-tainted soil. In 1999, the bulldozed and cleaned-up Times Beach reopened as the Route 66 State Park. Times Beach has remained a Ghost Town since that time.