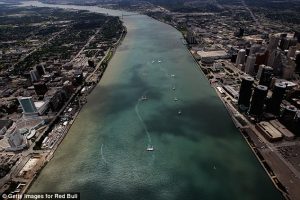 When a body of water stands between two places that people need to go, there are a few options to solve the dilemma…a bridge, a road around, or as was the case of a way across the Detroit River, a tunnel. With a river, you can’t really go around, so often it’s a bridge, but in this case there was a great deal of opposition to a bridge over the river. Since the beginning of the 19th century, Detroiters and Windsorians had been trying to find a way to move people and goods back and forth across the Detroit River. For decades, railroad interests proposed tunnels and bridges galore, but powerful advocates of marine shipping always managed to block those projects, because they did not want to lose business to faster and more capacious trains. Plans for bridges were particularly troubling to those shippers, since just one low-hanging bridge had the potential to keep high-masted sailing vessels off the river altogether.

In 1871, the region’s railroads finally won permission to build a trans-national tunnel, and workers began to dig into the river at the foot of Detroit’s San Antoine Street. They were forced to abandon the project just 135 feet 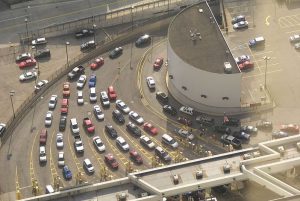 under the river, however, when they struck a pocket of sulfurous gas that made workers so ill that none could be persuaded to return. Likewise, in 1879, another tunnel had to be abandoned when it ran right into some unexpectedly difficult to excavate limestone under the river. The first successful Michigan to Canada tunnel project finally opened in 1891. It was the 6,000 foot long Grand Trunk Railway Tunnel at Port Huron.

Soon enough, it was clear to most people on both sides of the border that they needed to build some sort of structure for transporting automobiles across the river too. In June 1919, the mayors of Detroit and Windsor decided to build a city to city tunnel that would serve as a memorial to the American and Canadian soldiers who had died in World War I. Even after advocates of the under-construction Ambassador Bridge tried to frighten away the tunnel’s backers by spreading rumors about the danger of subterranean carbon monoxide poisoning, the tunnel boosters were undeterred. One said, they were “inspired by God to have this tunnel built.” Construction began in 1928. First, barges were used to dredge a 2,454 foot long trench across the river. Then workers sank nine 8,000 ton steel and concrete tubes into the trench and welded them together. Finally, an 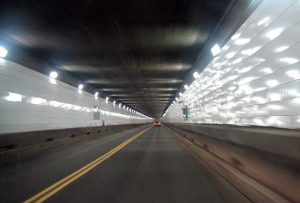 elaborate ventilation system was built to make sure that the air in the tunnel safe to breathe.

On Nov 1, 1930, President Herbert Hoover turned a telegraphic Golden Key in the White House to mark the opening of the 5,160 foot long Detroit-Windsor Tunnel between the United States city of Detroit, Michigan, and the Canadian city of Windsor, Ontario. The tunnel opened to regular traffic on November 3, 1930. The first passenger car it carried was a 1929 Studebaker. In the first nine weeks it was open, nearly 200,000 cars passed through the Detroit-Windsor Tunnel. Today, about 9 million vehicles use the tunnel each year.