The World Of Speed 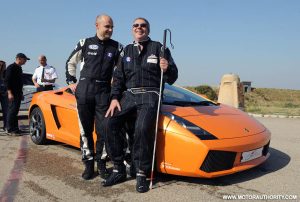 I think most of us have, at one time or another, watched a car race, be it locally, NASCAR, or maybe even street racing…the illegal kind. We might have even raced some ourselves, because when a kid gets behind the wheel of a car, they tend to want to show off a little bit. I suppose it’s the thrill of the race, and feeling the speed of the car beneath you…whether it’s safe or not. Still, most of us don’t tend to get our cars going as fast as the real racecar drivers do. I don’t know about you, but I think that for most of us, going at some of the NASCAR speeds, in real life, is pretty insane. Those drivers are specially trained, and even then, some have been killed or severely injured in bad crashes during those races. As for me, I think I’ll leave the racing to the professionals.

Not all professionals are what you would expect, however. Yesterday, October 11, 2008 marked a very interesting day in the world of speed. On that day, a speed record was set. A man named Luc Costermans, from Belgium set a world speed record driving 192 miles per hour in a borrowed Lamborghini. What? You are sure the record is much higher than that. Well, you would be right, if we are talking about a sighted driver…but, we are not. Luc Costermans is completely blind!! I’m sure that you were as shocked as I was, but let me tell you that he is not the only blind speed racer. Luc Costermans’ record breaking run was performed on a long, straight stretch of airstrip near Marseilles, France. He was accompanied by a carload of sophisticated navigational equipment, as well as a human co-pilot, who gave directions from the Lamborghini’s passenger seat. How fast would you have to be able to give directions to correct a course error for a blind man traveling at 192 miles per hour? Seriously, I don’t know if the co-pilot was very brave, or simply insane!!

To add to the amazing nature of blind speed racing, Costermans is not the first one, and will not likely be the last. The record Costermans broke belonged to Mike Newman, who was a British driver, and who set his record exactly three years to the day before Costermans. Newman had coaxed his 507 horsepower BMW M5 to a top speed of 178.5 mph. For his part, Newman had smashed a 2 year old record 144.7 mph…that he had set himself in a borrowed Jaguar, just three days after he learned to drive. Unlike Costermans, Newman did not race with a co-pilot or a navigator. Instead, he got his father-in-law to zoom around the track behind him, shouting directions over the radio…what??? My mind was racing by this time. Again came the thought of how fast would his father-in-law have to be talking, and then, the thought that his father-in-law was also driving that fast. Was he a racecar driver too? I can’t imagine my father-in-law would have ever driven that fast. He would have asked me if I was insane.

Both of these blind record-setters are serious competitors who race all sorts of vehicles. In 2001, Newman became the fastest blind motorcycle driver in the world, with a record speed of 89 mph, set just four days after learning to ride. Five years later, Costermans flew a small airplane all around France. He was joined by an 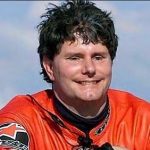 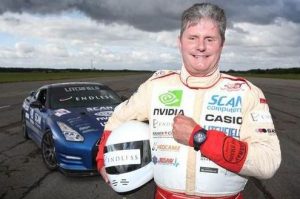 instructor and a navigator. Another record-setter, an Englishman named Steve Cunningham, had set the land-speed record himself in 1999, traveling 147 mph, while driving a Chrysler Viper, at the same time that he held the sea-speed record for a blind sailor. In 2004, guided by sophisticated talking navigational software, Cunningham became the first blind pilot to circumnavigate the United Kingdom by air. These men have taken record setting to new levels. I can’t imagine trying these stunts, but then I guess I’m not them.