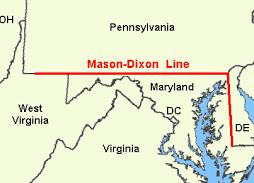 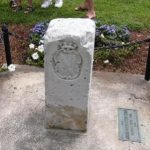 I think most of us have heard of the Mason-Dixon Line, but do we really know what it is and how it came to be called that? Maybe not. It was on October 18, 1767 that two surveyors, Charles Mason and Jeremiah Dixon completed their survey of the boundary between the colonies of Pennsylvania and Maryland, as well as areas that would eventually become the states of Delaware and West Virginia. The Penn and Calvert families had hired Mason and Dixon, two English surveyors, to settle their dispute over the boundary between their two proprietary colonies, Pennsylvania and Maryland. The dispute between the families often resulted in violence between the colonies’ settlers, the British crown demanded that the parties involved hold to an agreement reached in 1732. In 1760, as part of Maryland and Pennsylvania’s adherence to this royal command, Mason and Dixon were asked to determine the exact whereabouts of the boundary between the two colonies. Though both colonies claimed the area between the 39th and 40th parallel, what is now referred to as the Mason-Dixon line finally settled the boundary at a northern latitude of 39 degrees and 43 minutes. The line was marked using stones, with Pennsylvania’s crest on one side and Maryland’s on the other.

When Mason and Dixon began their endeavor in 1763, colonists were protesting the Proclamation of 1763, which was intended to prevent colonists from settling beyond the Appalachians and angering Native Americans. In reality, expansion was inevitable, but many in government couldn’t seem to see that. As the Mason and Dixon concluded their survey in 1767, the colonies were engaged in a dispute with the Parliament over the Townshend Acts, which were designed to raise revenue for the British empire by taxing common imports including tea. A protest that resulted in the Boston Tea Party, but that is another story. Twenty years later, in late 1700s, the states south of the Mason-Dixon line would begin arguing for the perpetuation of slavery in the new United States while those north of line hoped to phase out the ownership of human property. This period, which historians consider the era of “The New Republic,” drew to a close with the Missouri Compromise of 1820, which accepted the states south of the line as slave-holding and those north of the line as free. The compromise, along with those that followed it, eventually failed, and slavery was forbidden with the Emancipation Proclamation in 1862.

One hundred years after Mason and Dixon began their effort to chart the boundary, soldiers from opposite 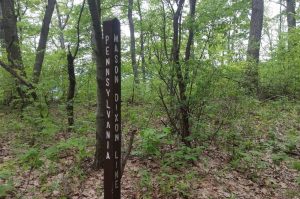 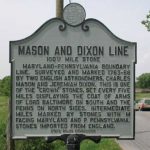 sides of the line spilled their blood on the fields of Gettysburg, Pennsylvania, in the Souths final and fatal attempt to breach the Mason-Dixon line during the Civil War. One hundred and one years after the Mason and Dixon completed their line, the United States finally admitted men of any complexion born within the nation to the rights of citizenship with the ratification of the 14th Amendment…a poorly thought out amendment which continues to cause illegal immigration to this day, due to birth right citizenship.

One Response to The Mason-Dixon Line