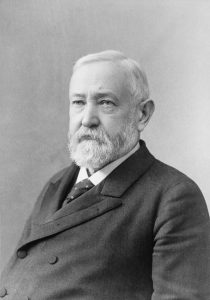 Sometimes, a business starts up and then can’t make a go of it. Whatever the reason, things just don’t work out. Such was the case with a 1690 newspaper called Publick Occurrences Both Forreign and Domestick. This newspaper was published for the first and last time on September 25, 1690, making it the shortest business on record.

It would seem like such a business venture wouldn’t hold a very significant place in history, but it did have one distinction that gave it an important place. It was the first multi-page newspaper published in the Americas. Before then, single-page newspapers, called broadsides, were published in the English colonies and printed in Cambridge in 1689. The first edition of Publick Occurrences was published in Boston, then a city in the Dominion of New England, and was intended to be published monthly, “or, if any Glut of Occurrences happen, oftener.” It was printed by American Richard Pierce of Boston, and it was edited by Benjamin Harris, who had previously published a newspaper in London. The paper contained four 6 by 10 inch pages, but filled only three of them…not bad for a new newspaper.

The second edition was never printed because the paper was shut down by the Colonial government on September 29, 1690, who issued an order as follows: “Whereas some have lately presumed to Print and Disperse a Pamphlet, 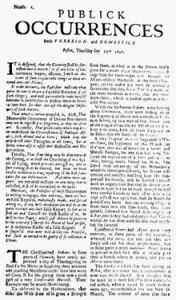 Entitled, Publick Occurrences, both Forreign and Domestick: Boston, Thursday, September 25th, 1690. Without the least Privity and Countenace of Authority. The Governour and Council having had the perusal of said Pamphlet, and finding that therein contained Reflections of a very high nature: As also sundry doubtful and uncertain Reports, do hereby manifest and declare their high Resentment and Disallowance of said Pamphlet, and Order that the same be Suppressed and called in; strickly forbidden any person or persons for the future to Set forth any thing in Print without License first obtained from those that are or shall be appointed by the Government to grant the same.”

Of course, in those days, we were not an independent nation, and the Constitution did not exist. Freedom of the press…or any of the other freedoms that our soldiers and our nation have fought to give us, didn’t exist either. England was the ruler and the law, and we had to obey…for a time. Soon enough, change would come, as would freedom, and every kind of newspaper and other types of information sources imaginable.