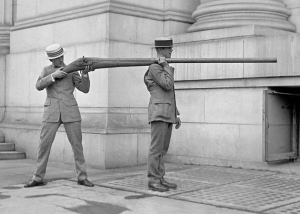 Most gun lovers have seen just about every gun out there, and I’m pretty sure that the gun lovers I know will most likely know about the Punt Gun. The punt gun gave a whole new meaning to the term packing. A punt gun is a type of extremely large shotgun used in the 19th and early 20th centuries for shooting large numbers of waterfowl for commercial harvesting operations. Punt guns were usually custom designed and so varied widely, but could have bore diameters exceeding 2 inches and fire over a pound of shot at a time. A single shot could kill over 50 waterfowl resting on the water’s surface. 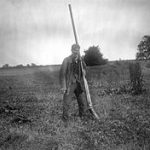 directly on the punts, which is a type of boat used for hunting, hence their name. Hunters would maneuver their punts quietly into line and range of the flock of birds, resting on the water, using poles or oars to avoid startling the birds. Generally the gun was fixed to the punt, so the hunter would maneuver the entire boat in order to aim the gun. The guns were sufficiently powerful, and the punts themselves sufficiently small, so that firing the gun often propelled the punt backwards several inches or more. To improve efficiency, hunters could work in fleets of up to around ten punts. In many ways it was a cruel way to hunt. Waterfowl flocks were severely depleted in the United States, so by the 1860s most states had banned the practice. 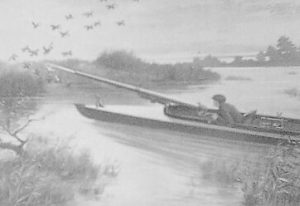 the transport of wild game across state lines, and the practice of market hunting was outlawed by a series of federal laws in 1918. There were still about 50 punt guns in the United Kingdom, as shown by a 1995 survey. The UK limits punt guns to a bore diameter of 1.75 inches by law. Since Queen Victoria’s Diamond Jubilee in 1897 there has been a punt gun salute every Coronation and Jubilee over Cowbit Wash in Cowbit, Lincolnshire, England. During the Diamond Jubilee of Elizabeth II, 21 punt gun rounds were fired separately, followed by the guns all being fired simultaneously. While the original use of punt guns was almost cruel, I suppose their latter uses is a much more noble way to use the guns.