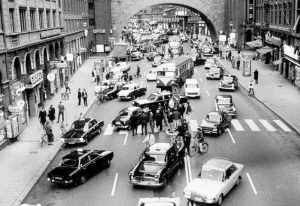 In Wyoming, where I live, traffic jams are pretty rare, but if you drive in the bigger cities, you can often find yourself stuck in heavy traffic, causing delays in reaching your destination. That can be quite annoying, but I seriously doubt if it is as annoying as the event that happened on September 3, 1967 in Sweden. That September 3rd was known as Dagen H…or H Day, so named after the word, Högertrafik, which is Swedish for right traffic. Prior to that day, the Swedish people drove their automobiles on the left side of the road, even though most of their Scandinavian neighbors drove on the right side of the road. In fact, most of Europe was on the right side of the road. Swedish cars had left hand steering, because their early automotive era relied on imported American automobiles. Still, Sweden had maintained a dominant left-hand traffic system since the mid 18th century. Initially, the usage of American cars…with drivers positioned on the left side of the vehicle seemed to work well in their minds. It allowed them to negotiate the tight squeezes past oncoming traffic by paying close attention to the underdeveloped left shoulders of the country’s old roads.

By the 1950s and 1960s, increased auto traffic and more developed roads created dangerous overtaking situations due to the mismatch of left-hand roads and American style left-side drive. Therefore, the Swedes implemented a switch for the sake of logic, safety, and consistency with their Scandinavian and continental counterparts. As often is the case, the change was not popular, and in a 1955 referendum, 83 percent voted to keep driving on the left. Nevertheless, on May 10, 1963, the Riksdag approved the introduction of right hand traffic in 1967, as the number of cars on the road had tripled from 500 000 to 1.5 million, and was expected to reach 2.8 million by 1975. A body known as Statens Högertrafikkommission (“the state right-hand traffic commission”) was established to oversee the changeover.

As Dagen H neared, the intersections were equipped with an extra set of poles and traffic signals wrapped in black plastic. Early in the morning on Dagen H, workers roamed the streets to remove the plastic. On Dagen H, a Sunday, all non-essential traffic was banned from the roads from 1:00pm to 06:00pm. Any vehicles on the roads during that time had to follow special rules. All vehicles had to come to a complete stop at 4:50pm, then carefully change to the right-hand side of the road and stop again before being allowed to proceed at 5:00pm. In Stockholm and Malmö, however, the non-essential vehicle ban was longer…lasting from 10:00pm on Saturday until 3:00am on Sunday, to allow work crews to reconfigure intersections. Certain other towns also saw an extended ban, from 3:00am on Saturday until 3:00am on Sunday. Roads, crossings, roundabouts, and flyovers had already been redesigned and some 360,000 road signs were changed during the overnight hours. The date had also been preceded by an intensive national campaign, informing people about what was going to happen that day.Some 130,000 reminder signs had been put up everywhere along streets and roads, and most cars had an H-sticker on the dashboard in front of the driver in order to remind him or her to drive on the right side of the road. Very few cars in Sweden were right-hand drive at the time, despite the fact that Swedish road users had been living with left side traffic for 233 years.

On the day of the change, only 157 minor accidents were reported, of which only 32 involved personal injuries, 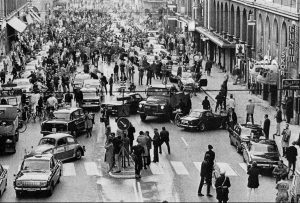 with only a handful serious. On the Monday following Dagen H, there were 125 reported traffic accidents, compared to a range of 130 to 198 for previous Mondays, none of them fatal. Experts suggested that changing to driving on the right reduced accidents while overtaking, as people already drove left-hand drive vehicles, giving them a better view of the road ahead. In addition, the change caused an increase in perceived risk and so was followed by very cautious behavior that caused a major decrease in road fatalities. Fatal car-to-car and car-to-pedestrian accidents dropped sharply, and the number of auto insurance claims went down by 40%. While all this was a good change, for a short time on that day, this was a serious traffic jam.