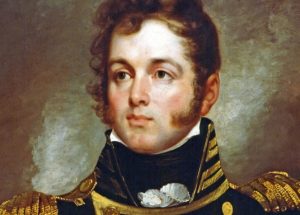 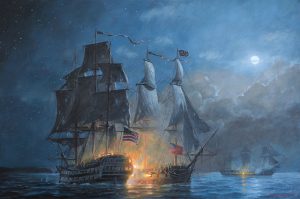 The War of 1812 was a conflict fought between the United States, the United Kingdom and their respective allies. British historians often view the War of 1812 as a minor theater of the Napoleonic Wars, but in the United States and Canada, it is seen as a war in its own right. When the War of 1812 broke out, the British immediately seized control of Lake Erie. They already had a small force of warships there…namely the HMS Queen Charlotte and the HMS Hunter. The HMS Lady Prevost was under construction and was put into service a few weeks after the war’s outbreak. These vessels were controlled by the Provincial Marine…a military transport service, and not part of the British navy. Still, they were there, and at the ready, when the call to war came.

In stark contrast, the Americans lacked any presence to counter the British armed vessels, because the only American warship on Lake Erie, the USS Adams, was not ready for service at the start of the war. When the American army of Brigadier General William Hull abandoned its invasion of Canada, the USS Adams was pinned down in Detroit by the British batteries at Sandwich on the Canadian side of the Detroit River. That left the Americans in a less than favorable position to fight for domination on the lake, and yet they knew it was going to be a necessary battle in the war. In what was going to become the first unqualified defeat of a British naval squadron in history, United States Captain Oliver Hazard Perry lead a fleet of nine American ships to victory over a squadron of six British warships at the Battle of Lake Erie.

The British had taken the USS Adams when Detroit was surrendered, renaming her HMS Detroit. Together with the HMS Caledonia, which had been commandeered from the Canadian North West Company, the ships were boarded and captured near Fort Erie on October 9, 1812, by American sailors and soldiers led by Lieutenant Jesse Elliot. HMS Detroit ran aground on an island in the middle of the Niagara River and was set on fire to prevent recapture. HMS Caledonia was taken to the navy yard at Black Rock and commissioned into the United States Navy. Also present at Black Rock were the USS Somers, USS Ohio, and the USS Trippe, which had all been purchased by the United States Navy and were being converted into gunboats. The British held Fort Erie and the nearby batteries which dominated the Niagara River. All the United States vessels were pinned down and unable to leave Black Rock. The British Major General Isaac Brock used his control of the lake to defeat Hull’s army at the Siege of Detroit, by cutting the American supply lines and rapidly transferring himself and some reinforcements to Amherstburg from where they launched a successful landing on the American side of the Detroit River, but this could not be allowed to continue.

On September 10, 1813, the battle for Lake Erie began. The battle was closely contested for hours, and United States Captain Oliver Hazard Perry’s flagship USS Lawrence was reduced to a defenseless wreck. Perry then transferred to the Niagara and sailed directly into the British line, firing broadsides and forcing the British to 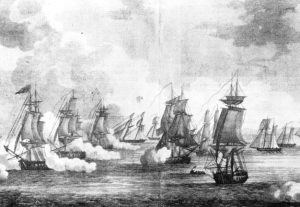 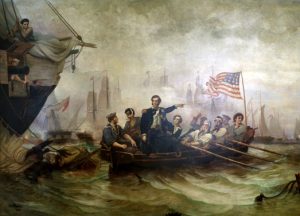 surrender. Perry had won a complete victory at the cost of 27 Americans killed and 96 wounded. British casualties were 40 dead and 94 wounded. After the battle, Perry sent a famous dispatch to United States General William Henry Harrison that read, “We have met the enemy, and they are ours.” The Battle of Lake Erie forced the British to abandon Detroit, thereby ensuring United States all future control over Lake Erie.