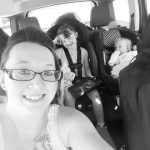 Motherhood is not a new venture for my grand niece, Melanie Harman, because she has been a mom since her daughter, Alice Green was born almost five years ago. Nevertheless, being the mother of three children is quite different than being a mother of one child. Following her marriage to my grandnephew, Jake Harman, Melanie and Jake, further expanded their family with the addition of a daughter, Izabella on December 21, 2015, and a son, Jaxx on May 30, 2017. With Belle, family outings were not a big issue. It was cold, and no one minded staying home. But with Jaxx, summer was just beginning, and the family wanted to do some things…and, one thing in particular…camping. That’s not the easiest thing to do with a baby either.

For the most part, healthy babies can go wherever their parents go, and Jaxx was a 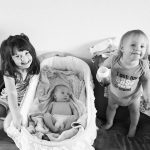 healthy baby. Still, every young mother wants to feel like their plans for the baby are ok and safe. Melanie is no different, so she asked friends with children how long they waited to go camping. Satisfied with the information she received, Melanie and Jake moved forward with their camping weekend plans. I’m sure it was with mixed emotions, that they made plans to take their children, including their one month old son camping for the Independence Day holiday weekend. They weren’t going far, just up on Casper Mountain, which is right outside town. It wasn’t that they worried about the safety of their son, but rather all the work of camping with a baby. Still, they weren’t the first ones to do that, as lots of people have camped with a baby. As expected, the camping trip went very well, and Jaxx not only survived the trip, but Melanie and Jake did too. Sometimes, I think it is the parents who may not be ready for such an outing!! There is a lot of work involved to take a baby camping, and the tent is not always conducive to some of the required elements of bringing a baby along 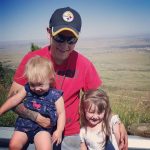 Melanie is a great mom, and her kids are well behaved and sweet. She is living her life dream…to be a wife and mother. There may come a day when she decides to opt for a career, but for right now, here babies need her more than the family needs the extra money, and if a woman plans things out right, the money will usually stretch to provide for the family and yet allow her to be at home raising her kids, rather than having them in daycare, where someone else is essentially raising them. I’m not saying that daycare is a bad thing, but if a mom can stay home while the kids a small, it is really a good thing, and that is what Melanie wants to do, and Jake wants her to be able to do. Today is Melanie’s birthday. Happy birthday Melanie!! Have a great day!! We love you!!