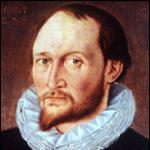 These days, since man has already been on the moon, I don’t suppose the scientists would feel the same excitement about seeing it through a telescope that they felt the first time they looked at it through a telescope. I’m sure that the creation of a map of the moon was an amazing accomplishment back in the 1600s. The earliest known telescope was built in 1608 in the Netherlands when an eyeglass maker named Hans Lippershey tried to obtain a patent on one. Although Lippershey did not receive his patent, news of the new invention soon spread across Europe. The design of these early refracting telescopes consisted of a convex objective lens and a concave eyepiece. The world was headed for a new and exciting journey that would someday put man in space and on the moon.

Thomas Harriot was a mathematician and astronomer who founded the English School of Algebra. He is described by some as “the greatest mathematician that Oxford has produced,” yet only recently has his name become widely known, and even now his achievements are not fully appreciated by most mathematicians. I’m sure he was an amazing mathematician, but it is his work in astronomy that interests me. As an undergraduate at Oxford, Harriot was a student at St Mary’s Hall. Harriot graduated in 1580 and went to London.

We know from manuscripts, belonging to Harriot, that he was engaged in deep studies of optics at Syon by 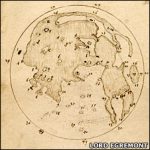 1597. Although in his manuscripts it states that he had discovered the sine law of refraction of light before 1597. The precise date of Harriot’s important discovery was July 1601. As with all his other mathematical discoveries, however, Harriot did not publish his findings. It is somewhat ironic, that Snell…to whom the discovery of this law is now attributed…was not the first to publish the result. Snell’s discovery was in 1621, about 20 years after Harriot’s discovery, but the result was not published until Descartes put it in print in 1637. He considered more complex systems and employed Christopher Tooke as a lens grinder from early 1605. His work on light now moved to the dispersion of light into colors. He began to develop a theory for the rainbow By 1606, Johannes Kepler had heard of the remarkable results on optics achieved by Harriot. Kepler wrote to Harriot, but the correspondence never really achieved any significant exchange of ideas. Perhaps Harriot was too wary of the difficulties that his work had nearly brought on him, or perhaps he did, as he claimed to Kepler, still intend to publish his results.

The appearance of a comet attracted Harriot’s attention and turned his scientific mind towards astronomy. He observed a comet on September 17, 1607 from Ilfracombe which would later be identified as Halley’s Comet.

Kepler had discovered the comet six days earlier, but it would be the observations of Harriot and his friend…and student, William Lower which eventually were used by Friedrich Wilhelm Bessel to compute its orbit. His astronomy was now back in the forefront of his mind, and Harriot went on to make the earliest telescopic observations in England. On July 26, 1609 at 9pm, he sketched the Moon, after viewing it through a telescope with a magnification of 6. He sketched the Moon again a year later on July 17, 1610, by this time he had a telescope giving him a magnification of 10. Soon he had constructed a telescope with a magnification of 20, then by April 1611 he had a 32 magnification telescope. While mapping the moon might seem to some like a minor achievement, it inspired him to continuously improve the telescope.