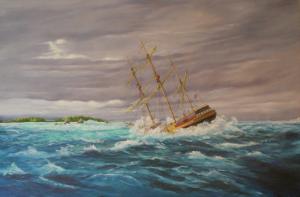 When people first began immigrating to the English Colonies, travel was not easy. In fact, sometimes it was absolutely treacherous. The only way to reach the new world was to travel by ship, and since storms were not able to be predicted far in advance, like they are these days, they sometimes found themselves at the mercy of the raging storm they were caught in. The first person known to have reached Bermuda was the Spanish sea captain Juan de Bermúdez in 1503. The islands are named after him. He claimed the islands for the Spanish Empire. De Bermúdez never landed on the islands, but made two visits to the island chain, and over the course of those visits, he created a recognizable map. I’m sure that at some point, de Bermúdez assumed that there would be people living on the islands, but it was not expected to be quite as soon as it was, or in quite the way that it was populated.

On July 28, 1609, a ship named Sea Ventureran into a reef that surrounds Bermuda during a hurricane. The ship was on its way to Jamestown, Virginia, but would not make it to that destination. The Sea Venture set out for Virginia on June 2, 1609, under the command of Sir George Somers, admiral of the fleet, with Christopher Newport as captain and Sir Thomas Gates, Governor of the colony. Sea Venture sailed with a fleet of ships, including the Falcon, Diamond, Swallow, Unity, Blessing, Lion, and two smaller ships. The ships were only eight days from the coast of Virginia, when they were suddenly caught in a hurricane. The Sea Venture became separated from the rest of the fleet, while its crew fought the storm for three days. Other ships the size of Sea Venture had successfully fought and survived such weather, but the Sea Venture had a one major problem. The Sea Venture was a new ship, and its timbers had not yet set. The storm forced the caulking from between the timbers, and the ship began to leak rapidly. The crew began desperately bailing, but water continued to pour into the hold. The crew threw some of the guns overboard in an effort to make the ship lighter, but this only delayed the inevitable.

The island was owned as an extension of Virginia by the Virginia Company until 1614. Then the Somers Isles Company, took over in 1615 and managed the colony until 1684. At that time, the company’s charter was 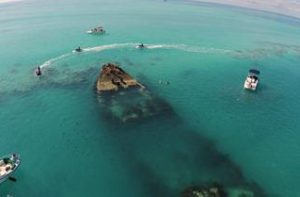 revoked, and England took over administration. Bermuda became a British colony following the 1707 unification of the parliaments of Scotland and England, which created the Kingdom of Great Britain. After 1949, when Newfoundland became part of Canada, Bermuda became the oldest remaining British overseas territory. After the return of Hong Kong to China in 1997, Bermuda became the most populated British territory. Today, Bermuda is a popular vacation spot for many tourists. Cruise ships and planes arrive daily. I’m sure the islands would have eventually been populated, but in the case of Bermuda, it was very much an accidental population, caused by an unfortunate ship wreck that first brought its survivors to the islands.