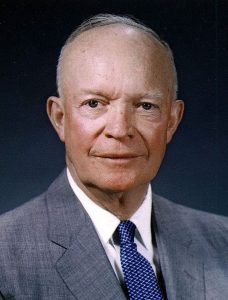 Recently, I found out that President Dwight D Eisenhower is my sixth cousin six times removed. We are connected on my mother’s side through her Pattan roots, which is her mother’s side. Eisenhower was the 34th president of the Unites States, serving from January 20, 1953 to January 20, 1961. He was also a five-star general in the United States Army during World War II and served as Supreme Commander of the Allied Expeditionary Forces in Europe. Eisenhower was responsible for planning and supervising the invasion of North Africa in Operation Torch in 1942 – 1943 and the successful invasion of France and Germany in 1944 – 1945 from the Western Front. In 1951, he became the first Supreme Commander of NATO.

With everything else that he did, it seems odd, I suppose, to mention the fact that on March 18, 1959, he signed the Admission Act. Basically, the act dissolved the Territory of Hawaii and established the State of Hawaii as the 50th state to be admitted into the Union. Statehood became effective on August 21, 1959…the last state to join the United States. Eisenhower, in fact, was the president who signed the last two states into the United States. To me that must have been such an awe inspiring thing to get to do. My guess is that Eisenhower really had no idea that Hawaii would forever be the last state in the United States, and I suppose that it is still possible that

another may join, but it has been almost 58 years, so it seems highly unlikely that there will be another. I wonder if, as his life was drawing to a close, Eisenhower gave any thought to the fact that he got to do that…to bring in the final two states in the United States. I also wonder if anyone thought there would ever be more states after Arizona and New Mexico were added in 1912, almost 47 years earlier. Maybe, adding another state to our country didn’t seem like such an important thing for a president to do, but I think it is. And to be the president to add the last two states…well, I just think that is very cool.

4 Responses to The Last State