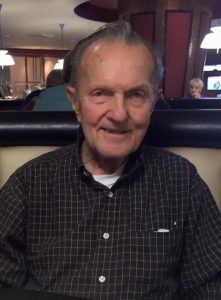 Not every person in a family is related by blood…or even by marriage. Sometimes, a lifelong friend is, in reality, as close as family. Such is the case with Burl Ford. Burl was one of the neighborhood kids that my mother, Collene Byer Spencer and her siblings played with as children. The first time I heard that they had been childhood friends, I was amazed, because by that time, we were living just down the street from Burl and his family, and in fact we were all friends, with them and their kids. Burl’s kids, Lisa, Susie, Burly, and Judy, were all in gymnastics, and his wife, Thea had learned how to coach and spot for the tumbling. So when my younger sisters and I were at their house, the natural next step was to do tumbling in their basement. It was Thea who instilled in me, the love of gymnastics, which I continued doing through high school.

Cheryl remembers playing Jacks on the patio in their back yard with Burl. That is an unusual thought, because Jacks was primarily a girls game…at least in school. Burl didn’t care about that. He loved kids, and playing with his kids and the neighbor kids 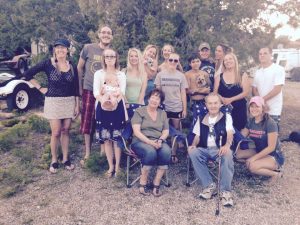 was totally within his nature…and in fact, growing up was totally not in his nature. Burl was a kid all his life. And…Burl loved his pranks!! I suppose these days he might have found himself in trouble, but those were different times. One prank, in particular, that lots of their family friends remember is the cherry bombs. In those days, kids could safely have sleep overs in someone’s back yard. The Ford’s back yard had a slight slope to it, and made for a perfect sleep over spot…in theory. You did have to take Burl into account. He would wait until we were all settled out there sleeping, and out of the blue, in the middle of the night…a cherry bomb would go off. Burl was careful of course, and never threw it near anyone, but it was something that definitely got your attention.

Today, we said goodbye to Burl…all of his friends and family. It was a beautiful service filled with happy 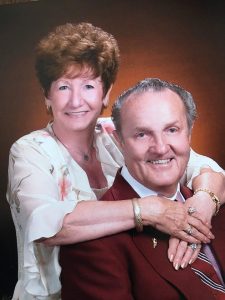 memories, and yes, the shedding of tears. Thea’s sisters reminded us of his love of sports, including the Broncos and the Colorado Rockies, as well as the Super Bowl games he got to attend, and throwing out the first pitch at a Rockies game. They told of his love of fishing, camping, snowmobiling, golf, travel, and precious time spent at their mountain cabin. And they told us about the many pranks and his bag of tricks. Burl was a member of the Oil City Slickers and Gentleman’s touch, both barber shop musical groups. The group sang at his service, and it occurred to me that, while the songs were beautiful, there was one voice missing. Those were wonderful memories, but it was something the minister said that particularly struck me as amazing. As he told of his last visits with Burl, and many before that, he said that the one thing he noticed was that Burl was always so happy and full of life. Then, he said that he wished that he could take some of Burl’s happy, joyous spirit and zest for life, and throw it out into the world. Instinctively, I thought…just pack it in a cherry bomb.

12 Responses to More Than Family Friends