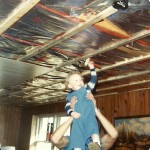 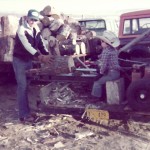 My nephew, Barry Schulenberg, and his wife, Kelli have been doing some remodeling on their bathroom and their home outside of Casper, Wyoming. Barry has a knack for carpentry, and that reminds me of the little boy that was Barry, helping his grandpa, my father-in-law, Walt Schulenberg build the family home north of Casper. It seems like so many years ago, and yet in my memory files, I can see it so clearly. In those days, Barry wanted to do anything his grandpa was doing…so much so, in fact, that Barry had decided that he didn’t need to go to school. He was just going to go to work with his grandpa. I can’t say exactly how much Barry learned about carpentry from his grandpa in those days, but I think he took something away from that experience, even as a little two year old boy. I think he found that he liked to build things, but more than that, it built a bond between grandfather and grandson that would last a lifetime.

Over the years, Barry helped his grandfather do anything he was doing. From splitting wood to working on cars, the two of them were almost inseparable, except for the inevitable job/school times that each had to go to. Barry lived for the time when his grandpa would be home from work and they could go work outside. I’m not sure if my father-in-law felt worn out or not, but if he did, he rarely showed it to Barry. They were best buddies and that was all that mattered. The three granddaughters that my father-in-law had then, were his little princesses, and were treated as such, but Barry was his working buddy, and that was just the way it was. I think the girls were ok with that too, because carpentry and cars really weren’t their idea of fun anyway.

I don’t know if Barry realized how special his relationship with his grandpa was, but I really hope he did or does now, because it was special. Not every little boy gets to spend the time with their grandfather that Barry did. That was a blessing beyond blessings for both of them, and it was special to watch too. My father-in-law has 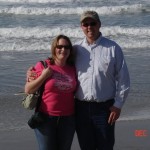 been gone now for over three and a half years now. I have to wonder if Barry misses his grandpa as he is working on the current project he has set himself to now. It’s not that Barry can’t do the work himself and with Kelli’s help, but I have to wonder if he doesn’t hear the echo of his grandpa’s voice guiding him through the steps to remodeling the bathroom. His grandpa really knew what he was doing, and to top it off, Barry looks like his grandpa too. No wonder they got along so well. They were two of a kind. Today is Barry’s birthday. Happy birthday Barry!! Have a great day!! We love you!!