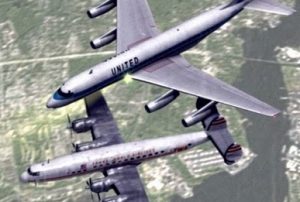 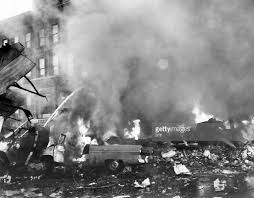 With the thousands of airplanes in the air at any moment, one might think that daily accidents would be common place, but in reality, air travel is actually very safe. Nevertheless, it is not without its tragedies. What tends to amaze me, however, is the fact that relatively few ever seem to crash in a city, even though the airports are usually very near cities. Still, there is not a perfect record of missing the cities, when it comes to plane crashes either, and when a plane crashes in a city, you know that the death toll will be higher, and more than likely will include people on the ground, who were just going about their day, completely unaware of the danger they were in.

Such was the case on this day, December 16, 1960, in New York City, when two commercial airliners, a United 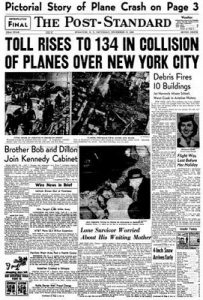 DC-8 from Chicago, that was heading to Idlewild Airport…now renamed John F Kennedy International Airport, in southern Queens, and a TWA Super Constellation from Dayton, Ohio that was heading to LaGuardia Airport in northern Queens, collided over the city, killing 134 people in the planes and on the ground. This remains the only such accident to occur over a major US city to this day. It was snowing that morning, and the United flight had been put into a holding pattern. Unfortunately, the pilot miscalculated the location of the pattern, the plane came directly into the path of the TWA flight, who was on approach to LaGuardia Airport. There were 128 people onboard the two planes, and all of them, except eleven year old Stephen Baltz were killed on impact. The boy would die from his injuries the next day, but he was lucid enough to give a brief account of the accident, saying that, “It looked like a picture out of a fairy book. Then all of a sudden there was an explosion. The plane started to fall and people started to scream. I held on to my seat and then the plane crashed.”

The TWA plane crashed onto Miller Field, a military airfield on Staten Island. The United flight, which was missing its right engine and part of a wing, came down in the middle of the Park Slope neighborhood of Brooklyn, narrowly missing Saint Augustine’s Academy. It hit an apartment building and the Pillar of Fire Church. Dozens of other buildings caught fire in the resulting explosion. Mrs Robert Nevin, who was sitting in a 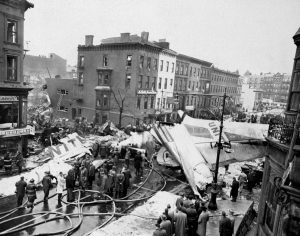 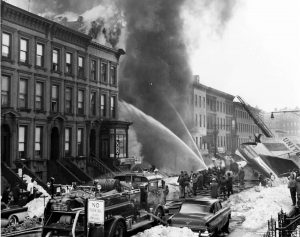 top floor apartment when the place crashed into her building, later said “The roof caved in and I saw the sky.” Six people on the ground died when the plane crashed, including the 90 year old caretaker of the church, Wallace Lewis, and two men who were selling Christmas trees nearby. Christmas presents carried by the plane’s passengers were strewn all over the streets. Firefighting efforts went on for nearly 72 hours because of the multiple fires.

One Response to Mid-Air Collision