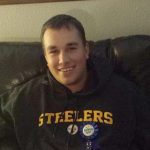 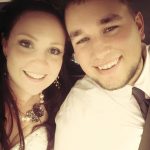 My grand nephew, Keifer Balcerzak has always been the kind of guy who likes to laugh. He has a great sense of humor, and really can be quite the comedian. He completely embraces the idea that all women are, and always will be a total mystery to men…a fact that I’m sure his wife, Katie enjoys immensely. Seriously, what woman doesn’t want to keep their man on his toes, and off his guard when it comes to them? And let’s be real here, men do not now, nor will they ever understand women. It’s just best to concede that fact, and do whatever she tells you to do. The home will be a much more peaceful place if you do…just saying, Keifer. I have a feeling that “peace” isn’t exactly what their home is like, however, because if I know Keifer, I imagine that a lot of teasing is going on there, because he does love a good joke.

Like most guys, Keifer loves football, and is looking forward to the coming season. Thankfully for him, he likes the same team as his dad does…the Pittsburgh Steelers, but that is one place where I have to say, he missed the mark. The Broncos are the best team, and that is just not up for negotiation. Still, I suppose both of them will argue that point with me. Apparently, they both still think they can win an argument with a woman. How crazy is that? It will never happen.

I can see that Keifer loves kids, and is a great uncle them, so even though he doesn’t pick the right football team, he wins points in my book, just for that part. I think someday, he and Katie will make great parents, because it is obvious that they both love children. And with his goofy ways, kids love him too. There is a lot to be said for a man who will get out there and play with the kids, no matter what their age or gender.

Keifer reminds me so much of his dad, Dave Balcerzak. The older he gets, the more he looks like his dad, and they both have very similar abilities. They are Technology Geeks for sure. Some people have a mind for 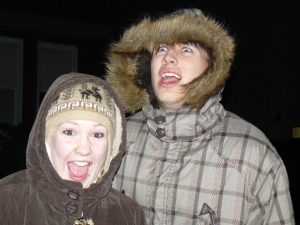 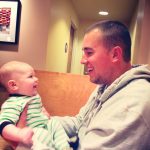 technology, and others just don’t. While I normally don’t need much help in the technology area, it is always nice to know that there are people I can call, who really know their stuff…and that would definitely be these two. When it comes to computer assistance, all I can say is that he and his dad are great additions to our family. After all, families working together and helping each other out is what it’s all about. Today is Keifer’s birthday. Happy birthday Keifer!! Have a great day!! We love you!!