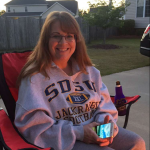 When my niece, Lindsay Hadlock Moore’s husband Shannon took a position as Special Teams Coordinator at East Carolina University, it meant that they would be moving from the Miami area of Florida to Greenville, North Carolina. That also meant that in due time, my sister, Allyn Spencer Hadlock and her husband, Chris would be traveling to visit their kids in their new home. That time came this week, when Allyn flew out last Saturday, and Chris joined them on Wednesday after a work related trip to Chicago. As Allyn was getting ready to fly out, she sent out a text to the rest of my sisters and me to let us know that she was leaving and when she would be back.

Of course, in our family of jokesters, it had to happen. Our sister, Cheryl Spencer 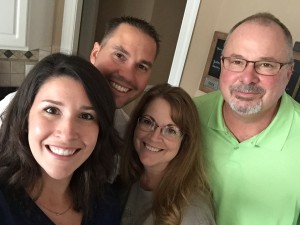 Masterson made the comment that Allyn, who would be landing in Raleigh, would be flying into Andy Griffith Land. I laughed, and Allyn commented, “Yay, Mayberry.” Then she said that, of course, Lindsay actually lives in Greeneville, North Carolina, or more correctly, a suburb called Winterville…to which I commented, “Sounds like Mayberry to me.” and Cheryl commented, ” Greenville, Mayberry. Pretty close!” If you will recall, the big city that everyone went to on The Andy Griffith Show, was Raleigh…which got the whole conversation going in the first place. Mayberry, of course, was a fictional town based on Mount Airy, which is Andy Griffith’s hometown. Mount Airy is three and a half hours west of Winterville, and a place that maybe the family will go see someday, since there are a number of Andy Griffith related sights to see there, such as Andy Griffith’s house, the Andy Griffith Museum, the Mayberry Fountain, and the Mayberry Campground, and several more I’m sure. 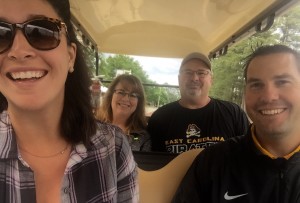 Of course, Andy Griffith…as much as we all loved him, was not the reason that Allyn and Chris traveled to Winterville, North Carolina. That honor belongs to their daughter and son-in-law, and now they are having a great time touring the campus of East Carolina University, and just spending quality time with their kids. It is always hard to have some of your kids living so far away, and you find yourself really looking forward to trips to see them, and their trips home to see you. they are having the time of their lives visiting, and really the only thing that has in common with Andy Griffith…is that this reunion is taking place in Andy Griffith Land.