It’s strange to think that your children have been married twenty two years, and together twenty five years, but that is exactly where I find myself today. I can’t believe that so many years have passed since those two kids got married. They were babies really!! How could they possibly know who they wanted to spend the rest of their lives with? That seemed to like such a strange thought to me, and yet Bob and I married at about that age too, and we have been married forty years. You can know for yourself, but it just feels different for your kids. And to top it off, they just seem younger than you were…somehow. Much like when I look at kids in high school these days. They just seem so much younger than I was then.

Nevertheless, these two young people made the decision to stay together for life, and they have stuck to it…through thick and thin. There is no marriage on this earth, and I don’t care whose it is, that manages to go along with no storm clouds in it. That is simply not how life in this world works, but troubles or not, it is the fighters…the ones who are determined to make it work, who will endure to the end. I have often said that the 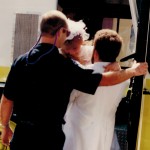 main reason Bob and I stayed together all these years, is stubbornness…pure stubbornness. We were just to stubborn to quit. That’s how Corrie and Kevin were too. When tough times came, the tough got going. Their marriage has not been stress free…but it has stayed together through anything, and today, before me I see two wonderful people who have stood the test of time, and have come out victorious!! People talk about stubbornness as if it is a bad thing, and maybe sometimes it is, but from what I have seen, that stubbornness, when used in the right way for the right things…such as a marriage, is one of the best assets a couple can have. And so it has been for Corrie and Kevin all these wonderful years of their marriage.

The wedding day flew by so fast. We remember some things, such as the fact that just as Pastor Dan said, “Dearly beloved…” a clap of thunder was heard, and the rain poured down. The kids, who had thought about an outdoor wedding, looked at each other, and were glad they were inside on their special day. It was rather comical, because when they suggested an outdoor wedding, I told them that you can’t be sure of the weather. They were a little miffed at me…until that moment. Nevertheless, if it had been outside, we would have made it work too. Their ride across town to the reception was quite unique too, in that they were transported in a fire truck. Bob was the mechanic for the fire department, and the firemen did it as a special favor. Very cool, and 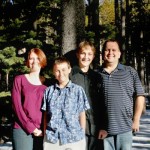 something we would never forget. Still, even with these special memories of that special day, it is the years since then that have been the most amazing. The births of their sons, Christopher and Joshua, the blessings they have been to me and to our whole family over the years…especially in our parents times of need. I always knew that I could count on them to be there for me, whenever I needed them, and Bob knew it too, as did any of the family who ever needed them. Corrie and Kevin have always been people you could count on. Things like that can never be repaid. Before me today, I see two wonderful people, and I wish them both many more years of wedded bliss and the very best that God can give, for the rest of their lives. Happy anniversary Corrie and Kevin!! We love you!!