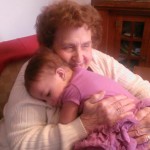 Not every great grandmother is so blessed to have a really close relationship with their great grandchildren, and it is even more rare with the youngest of twenty great grandchildren, in which the oldest one is twenty four. My mother, Collene Spencer was a very blessed woman. Her relationship with her youngest great grandchild, Aleesia Spethman, who is my sister, Cheryl Masterson’s granddaughter, was one that was the rarest of the rare, and just as blessed for both of them. Aleesia has three older brothers, and at two years of age, taking her to all the activities the boys are into is difficult. That works our really well for my sister and it also worked quite well for our mom, because they got to see the baby often.

For Aleesia, the two relationships were different, even though they lived in the same house, and spent the time together. She loved both her grandma and her great grandmother, but the relationships were very unique. Aleesia decided that Mom would be called GiGi. Aleesia is too young to know that our mom was her great grandmother. The name GiGi seemed very fitting to my sister, because Mom was, after all Aleesia’s great grandmother, or GG. Aleesia loved coming over to GiGi’s house. Every time she came over, she would run in calling for GiGi. Then she would run over to see her. Aleesia trusted GiGi implicitly. Every time she was there, she would pull Mom’s walker over to Mom’s chair and climb up on it. Then she would jump from it into Mom’s arms. It never occurred to Aleesia that Mom wouldn’t catch her…she knew her GiGi would always catch her. It was a relationship that was so sweet to watch.

When Mom went to Heaven, the family and especially Aleesia’s parents, Jenny and Steve Spethman, and my 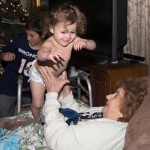 sister, Cheryl, were worried about how Aleesia would deal with that, especially since Cheryl would continue to live in Mom’s house. She has done pretty well. She asked about Mom often at first, then she seemed to understand that GiGi wasn’t there, but even a two year old Aleesia is not immune to those ton of bricks moments. The other day, as Aleesia and my sister, her grandma, Cheryl were coming to the house to spend the evening at Mom’s house, Aleesia ran up to the door excitedly like she used to before, and knocking on it she said “We see GiGi?” Then she stopped and looked down, like she realized something. She turned and saw Mom’s car parked on the street, and with a really sad face, she said, “She’s not home.” Such a sad thing for a little two year old to have to try and understand, because her GiGi has always meant so much to her.