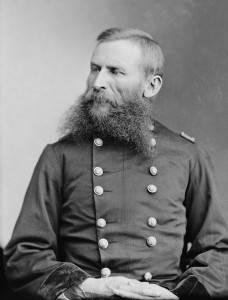 The states we now know as Montana and Wyoming, were originally supposed to belong to the Indians…a fact that many people don’t realize. Unfortunately, the White Man only stuck to a plan as long as the plan worked for the White Man. When gold was found in the Black Hills, there was no holding the White Man back. The plan was to try to buy the land from the Indians, but when that was not well received, they gave them an ultimatum…report to the reservations…or else. It was a matter of sell to us or we will take it…sound familar? The Indians simply did not take to the White Man’s plan very well. War broke out pretty quickly, and it was different than other wars, because the Indians did not play be the White Man’s rules of engagement. It was a very different type of war, and to win, the White Man would have to learn how to fight in a very different way. And it was a way they were not very good at.

Most people remember the Battle of the Little Big Horn, in that so many men rode to their deaths. While Custer was in a place he shouldn’t have been, and a battle in which he was outnumbered, it is my opinion that he took a bad situation and did the best he could do with it. He went into battle knowing he would not survive it, and in that way it was brave. Even if the battle was not going to be won, it was brave. Still, that battle was not the only battle that showed bravery against daunting odds.

Just eight days earlier, Sioux and Cheyenne Indians won a major victory over General Crook’s forces at the Battle of the Rosebud. General Cook was in command of one of three columns of soldiers who were converging on the Big Horn Country of southern Montana that June. Sitting Bull, Crazy Horse, and several other chiefs had 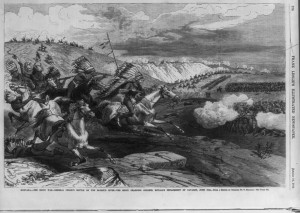 joined forces in the area. They were there in defiance on the US demands that the Indians confine themselves to the reservations. The army saw this protest as an opportunity to launch a massive three-proged attack, fully expecting to win a decisive vistory over the Indians.

Crook and his men marched north from Fort Fetterman in Wyoming Terretory, intending to join the two others, the columns of General Gibbon and General Terry. General Terry’s force included the soon to be famous 7th Cavalry under the command of General George Custer. Given the distances between the troops and the lack of reliable communication, it was difficult to coordinate the three armys. Their plan was to converge on the valley of the Big Horn River and stage their assault. The biggest problem was that they had only a vague idea of how many men their enemy included, and they were way off.

Upon their arrival in the area, Crook’s scouts told him that there were signs of a major Sioux force in the area. Crook was convinced that the Sioux would run rather than fight, and he thought they were encamped near the Rosebud Creek. He wanted to attack before they had time to run. Unfortunately for him, they did not have the intel to know that they were severely outnumbered, not did he know that Crazy Horse was a brilliant war chief. The scouts tried to warn General Crook that Crazy Horse would never allow him to attack a stationary village, and he soon learned that they were right. 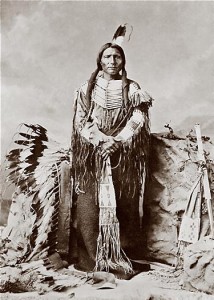 At around 8:00am on this day, June 17, 1876, Crook halted his force of 1,300 men in the bowl of a small valley along the Rosebud Creek to allow the rest of his men to catch up. The men unsaddled their horses, and within minutes a mass of Sioux Indians converged on them. They were hit by a force of 1,500 Sioux Indians and unbeknownst to Crook, Crazy Horse had an additional 2,500 warriors in reserve. Crazy Horse’s 4,000 warriors outnumbered Crook’s divided and unprepared army three to one. Had it not been for the wisdom and courage of Crook’s Indian allies, the battle would have ended just like the Battle of the Little Big Horn. There were numerous brave acts on both sides, including a Cheyenne girl who rescued her brother after his horse had been shot out from under him. In the end, 28 men were killed and 56 were seriously wounded. Crook withdrew his men. The warriors were emboldened and eight days later they joined up with their tribesmen in the Battle of the Little Big Horn, which of course, wiped out General George Custer and the 7th Cavalry.