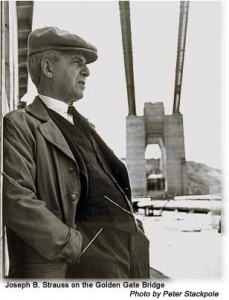 Some challenges are tougher than others, and the challenge to connect San Francisco with Marin County, California rates right up there among the most difficult…at least in 1937. I’m sure there have been bigger challenges since then and even before then, but I think that building what was the longest suspension bridge in the world in 1937 had to be really difficult. The bridge, which was built between January 1933 and May 1937, was to be 4,200 feet long. Its location was probably the biggest challenge the builders faced. The bridge is very close to the San Andreas Fault, which runs north and south directly through the San Francisco area. The bridge had to be built in such a way as to ensure its stability in the event of an earthquake. While earthquakes can happen anywhere in the world, it is such a strange idea to me to build something that depends on solid ground, on a known fault. Nevertheless, the bridge still stands today, and there have been many earthquakes in that area.

The second challenge the builders faced was the tumultuous waters the bridge had to span. The dangers that presented for the underwater construction were grave. The construction teams started their work on the peninsulas, building out over the wind-whipped waters of the San Francisco Bay. With labor and 70,000 tons of steel, they built arms that reached out to each other over the straits, getting closer by the day. Given the strait’s precarious mixture of violent winds, swirling currents, and thick fogs, many thought such a bridge couldn’t be built. Nevertheless, the builders have prevailed against the challenges they faced, because the bridge was completed successfully. In all, eleven men would lose their lives during construction, ten of them on February 17, 1937 when a section of scaffold carrying twelve men fell through the safety net.

I think the biggest challenge, that did not involve the elements, was a city who was skeptical and many people who were simply against a bridge across the San Francisco Bay. Nevertheless, Joseph Strauss, the engineer fought for 16 years to convince the people that the bridge was an amazing idea. He was a very proud man when he, on opening day, triumphantly exclaimed, “The bridge which could not and should not be built, which the War Department would not permit, which the rocky foundation of the pier base would not support, which would have no traffic to justify it, which would ruin the beauty of the Golden Gate, which could not be completed within my costs estimate of $27,165,000, stands before you in all its majestic splendor, in complete 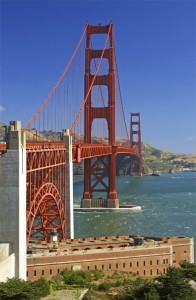 refutation of every attack made upon it.”

And so it was that the seemingly impossible was accomplished. The bridge was set to open on May 27, 1937, and by 6:00am, 18,000 people were lined up on both the San Francisco and the Marin county sides. In all, about 200,000 people showed up that day. At the appointed hour, a foghorn blew, and the toll gates opened. The earliest arrivals would have the distinction of being among the first to cross. Many offices, schools, and stores closed to attend the great event. The day was designated Pedestrian Day. The next day, he bridge opened to vehicle traffic. President Franklin Delano Roosevelt proclaimed the bridge open to the world. By the end of that day, 32,000 vehicles had paid the tolls and crossed the historic bridge. In the 70 plus years it has been open, it is estimated that nearly 2 billion vehicles have crossed the bridge. The Golden Gate Bridge and the views it holds are beautiful, and I am happy to have been one of those people to have crossed it.