The Birth Of Aerial Warfare 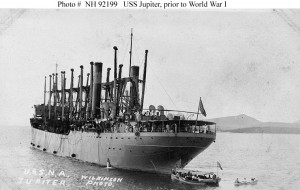 Following the first successful airplane flight by the Wright brothers on Dec 17, 1903, the world changed dramatically…as did the way we fought wars. Of course, just because the Kitty Hawk broke free of the gravitational pull of Earth on that day, did not mean that we went straight to jets. Nevertheless, by the 1920s, airplanes were more common. With this change in travel and maneuverability, came the ability to use these new weapons in warfare. While it took time to develop airplanes to the ability needed to use in a war, in all reality, warfare was forever changed on that day.

The United States quickly became interested in aerial warfare, and began work on developing the planes and providing training for the pilots who would fly them. In August of 1910, Jacob Earl Fickel did the first experimenting, with Glenn Curtiss shooting a gun from an airplane. At that time, planes couldn’t easily fly across oceans like they can now, so if they were to be used in warfare, they would have to be transported to the war zone somehow. That brought about the expirements to see if it was practical to take off and land on a ship. I have to wonder just how many failed attempts they had before civilian pilot Eugene Ely successfully took off from a wooden platform installed on the scout cruiser USS Birmingham on November 14, 1910 near Hampton Roads, Virginia. This exceptional pilot successfully took off, and then landed safely on shore a few minutes later. Several months later on January 18, 1911, he also successfully landed on a platform on the USS Pennsylvania in San Francisco harbor.

Now that they knew it could be done, it was time to find a ship to be the carrier full time. Enter the USS Jupiter. The USS Jupiter was a collier ship, which is a bulk cargo ship, from 1913 to 1920. At that point, it was 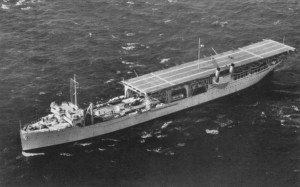 decided that the USS Jupiter would be decommissioned, and converted into the first aircraft carrier in history. Once the work was finished, the USS Jupiter became the USS Langley on April 11, 1920 and was recommissioned as an aircraft carrier on March 20, 1922. Her first executive officer felt right at home on the new ship, because Commander Kenneth Whiting, who was a former submarine commander turned aviator, had been transported to England by the collier Jupiter. Whiting, who earned the title “Father of the Aircraft Carrier,” was the last naval aviator to take training personally from Orville Wright…bringing things full circle so to speak…but the story never really ends does, now does it.

2 Responses to The Birth Of Aerial Warfare