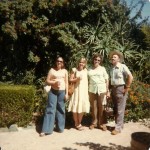 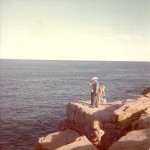 In 1980, my parents and younger sisters took a trip to California. It was a trip that would take them to the famous Golden Gate Bridge, as well as, drives along the Pacific Ocean, and relaxing time spent on the beach. It was the first of a number of trips my parents would take to California. They really loved that area. I would not get to see California until the late 1990s. I’m not sure what took me so long really.

Today is a rather significant day in the history of San Francisco, and one that in reality makes any trip to California worth taking. It was on this day January 5, 1933 that work began on the rather controversial Golden Gate Bridge. I’m sure that most people would not think of the bridge as being controversial, but there were a lot of people who were against it because they thought it would ruin the beautiful view of the San Francisco Bay. I guess I can understand that to a degree, because I am someone who really doesn’t like change much, but when you look at the finished product, I would have to agree with most people when I say that I think this one was a good change. The bridge is a beautiful addition to the bay. I especially like its red color, which I suppose might seem a bit unusual for a bridge. Nevertheless, it does make this bridge stand out.

Still, why was the bridge necessary? When you look at the whole area, you find that you could have driven around the area. Nevertheless, I’m sure that back then, driving around would take too long. The idea was that if the land north of the bay was easier to access, it’s value would increase. It made sense, but while the idea was first presented in 1869, it was pretty much tabled until it was revisited in 1916, when a former engineering student named James Wilkins, who was working for the San Francisco Bulletin brought it up again. He proposed a suspension bridge with a center span of 3,000 feet which was nearly twice as long as any bridge in existence at the time. The expected cost was $100 million, but when the city engineer, Michael O’Shaughnessy, who is also credited for naming the Golden Gate Bridge began to ask around, he found Joseph Strauss, a 5 foot tall Cincinnati born Chicagoan who said he could do it for less. In fact, for $25 – 30 million, Strauss said he could build one with a 4,000 foot span.

The idea was well received, but the Great Depression would stall the construction until 1933 when bonds could be sold to make it happen. The bridge would take four years to complete, and so it first opened on May 27, 1937, as the longest bridge span in the world 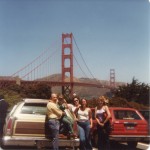 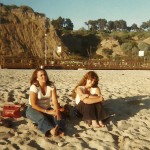 at that time. The first public crossing had taken place the day before, when 200,000 people walked, ran, and even roller skated across the bridge. It’s red paint job and its famous towers have made the Golden Gate Bridge an American landmark and popular tourist attraction ever since, and one that I am glad I got to see. While San Francisco’s temperatures don’t always appeal to me, the summers of which are not always warm, I do nevertheless, love visiting there. Like my parents, I find the California coast to be a pleasant change from the mountains of Wyoming.