Sometimes in life, we are handed a blessing that takes us by surprise. Such was the case with Uncle Butch Schulenberg. Butch is my father-in-law, Walt Schulenberg’s half brother, and since my father-in-law’s passing, I have had the wonderful opportunity to get to know Butch, if only through Facebook. This is a fact that I’m sure my father-in-law would be quite pleased about. When my father-in-law passed away, we needed to let his family in Forsyth, Montana know. It was a hard time for all of us. Then, something very nice began to happen. I had connected via Facebook with Butch Schulenberg’s daughter, Andi Kay, and that has led to blessed connections with her brothers Todd and Heath, and her sister-in-law, Jennifer, as well as Butch’s wife, Charlys and their granddaughter Savannah. Each of those connections is a sweet blessing in it’s own way, and I am so thankful for each, but the connection to Butch as been especially wonderful, because of the kind of man he is.

Butch reminds me a lot of my grandfather, George Byer. He is an encouraging sort of man who always makes you feel important. I’m sure his kids and grandkids can attest to that, because I’m sure that over the years he has encouraged them in whatever they chose to do. Of course, being encourage is not the only reason I feel a closeness to Uncle Butch. It’s because he has just welcomed me into his family. Unfortunately, for many years, there was not a closeness between my husband’s grandfather, Andrew Schulenberg, and my father-in-law, Walt Schulenberg, but when they decided to set aside those feelings and reconnect, that was for them the end of a long era of being distant from each other.

It is strange, however, that somehow, I was unaware of the relationship the half brothers had developed. It wasn’t until I was involved in taking care of my father-in-law, that I even knew that they were in touch with each other at all. Of course, it is no surprise that these two men would get along so well, because I believe they are two of a kind. It is a hard thing to fully express the personalities of these men, but gentleness, kindness, encouraging, and accepting are words that all come to my mind. These are attributes that really leave a person no choice but to like the person who has them…and these men have, or in my father-in-law’s case, had these attributes. They leave a person room to be their own person, knowing that the people they respect, also respect them enough to trust their judgment, and celebrate their successes. Even if the accomplishment isn’t anything major, these men could make it feel like it was. Can it get any better than that? I don’t think so.

I’m not saying that I crave praise, or that it is the praise that makes Butch special, because that would be inaccurate. It is just the person Butch is that makes his very dear to me. Every interaction I have with him 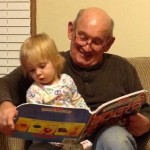 reiterates just how much I like the person he is. At some point, we are hoping to meet up and have an actual face to face conversation, with several of us in attendance, an idea that I am very much looking forward to. Still, for now, I am glad to have connected with him on Facebook, because it has given us the chance to get to know each other. This isn’t Butch’s birthday or any other special day that I know of, but rather just a chance for me to tell this sweet uncle just how glad I am that our families have connected…because he has been such a surprise blessing, and one I feel very thankful to have received. Of course, that blessing is nothing new to those who have known Butch all their lives. Thank you Butch for being an important part of my life, and the lives of all the people you touch with your gentle kindness. We love you!!