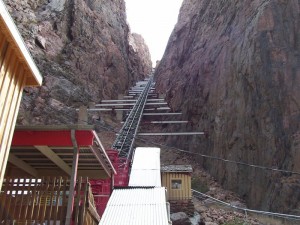 Pretty much everyone has taken a ride on a roller coaster, but have you ever thought about where these originated or who thought them up? You might be surprised to learn that the roller coaster originated in Russia. I know that this is not at all what I expected. In Russia, they built a wood frame that the sledders used to fly down 70 foot high mountain slopes as early as the 16th century. Now, I don’t know it I would consider that to be a roller coaster, but I can tell you that I know it would be a scary ride. There weren’t any breaks on the whole thing. Just you and gravity. The ride was so popular that they built a summertime version…a wheeled cart that took riders down a wooden ramp. If that version, which I have seen in Jackson, Wyoming, and Keystone, South Dakota, though not at 70 foot drops, was as uncontrolled as the first one, I would not be on it.

Many of the early roller coasters, which were probably not what we would consider to be real roller coasters either, were designed as improvements to incline railways systems. Those patents began as early as July 2, 1872, but they were designed to take you from the top to the bottom of a hill or canyon, like the one at Royal Gorge in Colorado, or at Lookout Mountain in Chattanooga, Tennessee. I have had the pleasure of riding and both of those and I enjoyed them very much. I’m sure that most people would consider this type of ride to be pretty tame, as it is very controlled. It would have to be controlled in order to stop at the bottom. 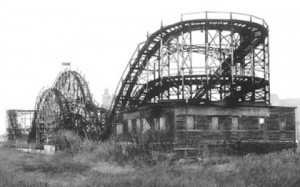 The Circular Railway, is probably the type of roller coaster that most of us rode as children. There are a few hills and slightly fast moments, but for the most part, it goes around in a circle, while going up and down hills. Pretty tame in the eyes of most thrill seekers, but for little kids, it works pretty well, or at least the old style did. I don’t know if some of the current circular railway roller coasters are scary or not.

Roller coasters continued to be very popular until economic changes in he 1940s, 50s, and 60s caused them to lose their appeal. Nevertheless, the roller coaster would rise again. Now, we have Megacoasters, Hypercoasters, and Gigacoasters. Megacoasters such as Phantom’s Revenge in Pittsburgh’s Kennywood Park or The Beast at King’s Island were first. Hypercoasters standing 200 feet high, the first of which was Cedar Point’s Magnum XL-200 and the Desperado near Las Vegas, Steel Force at Dorney Park in Allentown, Pennsylvania and Mamba at Worlds of Fun 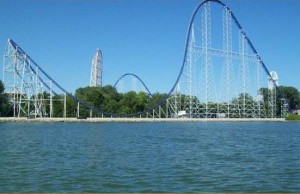 in Kansas City, Missouri, took things to the next level. Cedar Point then introduced Millennium Force, the world’s first Gigacoaster topping off at an astounding 310 feet above the ground.

I suppose that in order to compete, rollercoasters will continue to become more wild, higher, and scarier as time goes on. I’m sure that many people look forward to each new one that is developed, but since I never liked merry-go-rounds or anything much scarier than a Ferris Wheel, I guess that I will have to leave those riding challenges to someone with more of a stomach for it than I have.