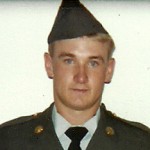 Once a war is over, the people of the world, and especially those who fought in the war never really want to think about it again, but it is, nevertheless, a permanent part of history. It was on this day, January 16, 1991 that America would go to war with Iraq for the first time, and it would be a war that would ultimately draw my brother-in-law, Ron Schulenberg back into the service from the reserves, which is where every soldier is for a time following their active duty term. Ron had joined the Army during a time when things were relatively quiet around the world, and he also ended his active service during a relative time of peace, but all that would change for him when he was notified that he would have to go back to active duty, and to Iraq.

I can only imagine how Ron felt upon receiving that letter. I know how the rest of us felt. We were very concerned for Ron’s safety. None of us wanted him to go, but this was not up to us. The government, and specifically the Army had spoken, and go he would. I remember talking to him about his time over there, years later. One of the things that most civilians wonder about is things like how they felt about killing someone else, or even just seeing a dead body that had been mutilated by the weapons of warfare. For Ron, one of the 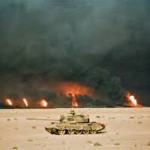 strongest memories was marching from one place to another and seeing all the death that was all around them…and then simply stepping over it, like it was a rock or tree stump. In my mind, that would be almost impossible to do, but I suppose that you simply get used to some things…or as much as anyone can get used to war and death.

The Persian Gulf War…known as Operation Desert Storm, was a short lived war. Saddam Hussein invaded the little country of Kuwait, because of their oil, making Egypt and Saudi Arabia very nervous, so they called on the United States. When Saddam Hussein refused to leave Kuwait, the war began. The biggest anomaly in Operation Desert Storm, was that the Iraqi soldiers were either not well enough equipped, or simply not willing to die for this cause, and so may of them actually came up to the American troops, and surrendered. I’m sure that the initial fighting, and the amount of war dead lying around the desert, made the decision to surrender seem like the best option. Ron told of this anomaly when we talked about his experiences, and it seemed that it was with a continued sense of relief. I can imagine that the thought of having to kill someone was not one that my brother-in-law relished, but something he would have had to do, had it became necessary. 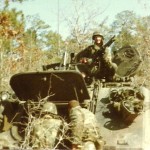 Ron returned to us from Operation Desert Storm, and his time in the reserves ended. The Persian Gulf area would continue to become more and more unstable, but by the time America would again find herself at war with Iraq and Saddam Hussein, Ron was not required to go. While it is my belief that the second war with Iraq has been far more successful, it has also been filed with far more casualties. I believe that if we had gone in and removed Saddam Hussein during Operation Desert Storm, the world would have been a better place. Would that have prevented the need to go back? I don’t know, but it would have spared many of the lives of the countless people that Saddam Hussein slaughtered during his time in power.