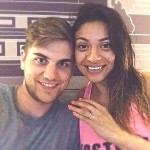 One Response to A Most Unusual Proposal