Danger On The River 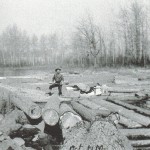 Many people have worked in the lumber business over the years, but I don’t think that there are many places, if any, that still float logs down river to get them to their destination. I think most logging these days is done using trucks, but it was quite common, in days gone by, to float those logs down the river to the saw mill.

It was at that time in history that my Great Uncle Albert Schumacher and my grandfather, Allen Spencer, decided to set out on what could only be deemed their frozen adventure in the world of trapping…that ended up being and adventure in logging. The two men were great friends in the years before Grandpa married Albert’s sister, my grandmother, Anna Schumacher Spencer. The year was 1910, and they left the warmth of home to head to northern Minnesota to trap for the winter. It was the coldest undertaking imagineable. The trapping part of their frozen adventure lasted about a month, and then, while they did get some pelts, they were done with freezing, starving, and trapping in general. That’s when the logging began.

The main way to get the logs to the sawmill in 1910 was Log Driving. Log driving is to use the river to transport the logs down stream, since big truch did not exist then. Driving logs down the river probably paid well, or at least it should have. Many men were killed after being crushed by logs in a jam or getting caught under the logs, and unable to get out, thus drowning. An ideal river is straight and slow moving, but few of those exist. In order to keep the logs moving smoothly, men were needed to guide them along. These men, called “log drivers” or “river pigs” had this dangerous job. They usually divided into two groups with the more experienced and nimble men on the “jam” crew or “beat” crew. Their job was to watch for potential jam spots, and if one started, they would try to get ahead of the game by jumping out on the logs to quickly dislodge them before more logs came down the river. They used a peavey hook, which consisted of a handle, generally from 30 to 50 inches long (0.75 to 1.25 m), with a metal spike protruding from the end. If 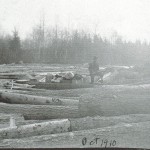 necessary, they used dynamite. You can easily imagine how dangerous dynamite would be, with no way to say where those logs or their splinters would go, and if your were far enough out of the way.

By the pictures here, I can see that my great uncle and my grandpa were on the jam crew, and so I know that while they may have tried not to think about it, they knew they were risking their lives to do the job they did. I can also say without doubt, that both survived their frozen adventure in the trapping and logging business, because had they not, some of my cousins, my sisters, and I would not be here to tell of their adventures.