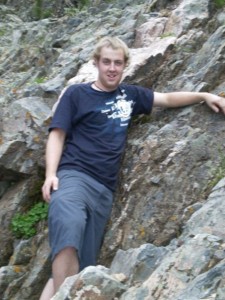 If you were to ask Garrett what he likes to do, you would probably find that his ideas of fun would fall squarely in the area of guy stuff. Garrett likes just about everything from golf, to hunting, to big trucks, and of course, Garrett loves sports of all kinds…and always has. Yes, I am aware that lots of girls like those things too, but to me they will always remain guy things…or maybe guy things that girls do too, sometimes.

Garrett also has a funny side. He loves to joke around, and especially to tease his sisters, Michelle and Lacey, and is sure to be the one goofing off at the exact moment that a picture is snapped. Anyone who knows Garrett has personally witnessed his goofy side, because it is simply not something Garrett can hide. It just bubbles out of him. One minute he might be serious, and the next he is busy making everyone laugh. When you think about it, that is a really great way to be.

These day’s Garrett is a grown up, with a job and all…not that a job changes the way he is. It’s not about whether or not Garrett is funny or whether or not he has a job though, in this case, its about what the job is. I thought about the fact that Garrett is a welder. That is what my dad was, and Garrett’s job reminds me that in many ways he is his grandpa’s grandson. Dad could be quite a cut up too. There are many things about Garrett that tend to remind me of my Dad. Mostly, I suppose it is a group of things. Mostly things that you can’t put your finger on separately, they just add up to a similarity, and that is an 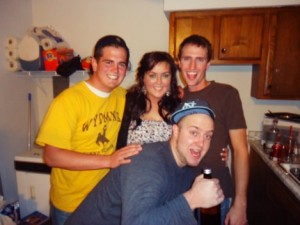 ok thing. I like the way many traits pass down from generation to generation and from ancestors to generations of the future. It somehow gives us a sense of belonging to someone…of belonging to a family, and really, that is what makes us who we are. Bloodlines, DNA, and simply imitation of those we love.

Today is Garrett’s birthday. It’s hard to believe that you aren’t a kid anymore…especially when you are being a cut up, but I am proud of the man you have become. I hope you have a wonderful day. Happy birthday Garrett!! We love you!!