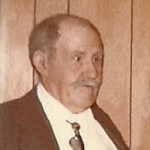 2 Responses to A Logger In The Off Season