Yesterday, my dear father-in-law passed away. It was a hard day for all of us. I have been thinking back over the years that I have been a part of this family. There were so many good memories. I will never forget the first time I met my future in-laws. There is no easy way to meet your boyfriend’s parents. You are simply a nervous wreck. We were going out to their house for dinner, and once I arrived, my father-in-law, broke the ice with his teasing ways. As so many girls who have known him can tell you, his first words were about what a “pretty girl” I was. When I blushed, he knew that I would be a good one to tease. My mother-in-law chewed him out for picking on me, but to that, my father-in-law simply grinned, and I knew I had made a new friend. By the end of the evening, I felt totally at home with my future in-laws.

This hard working man began working when he was just 13 years old. He worked at a ranch, milking cows before and after school. So began his working life, and he would be a hard working man for many years to come. While he was tough in many ways, when it came to his kids, he was a big teddy bear. His family was his life, and he had a soft heart when it came to them. All of his kids knew that they could call him whenever they needed wisdom concerning any situation. He always seemed to have an answer or at least an idea as to how to solve the problem. He had so much experience in so many areas, that often there was no need to call someone else to help. Even when they did need to call someone else, he probably knew someone who could do the job well and for less.

As for me…well, Dad always made me feel special. From that first meeting, until our last visit on Saturday night, his love for me was such a blessing. I felt so honored on the day he said, “You are no longer my daughter-in-law, you are my daughter.” I had the great privilege of taking care of this wonderful man since 2007. During that time I watched his brave struggle against the disease that would eventually take his life. He was not a man to complain, and he always hated to be a bother. Since we spent much time together these last few years, we became very close. His smile will always be in my memory. He was a man who returned the love he was given…in triplicate.

He had a team of caregivers, including his sons, Bob and Ron; his daughters Brenda, Jennifer, and Debbie, when she was in town; daughters-in-law, Rachel and me; his grandchildren, Corrie, Amy, and Barry, and Machelle, when she was in town; and great grandchildren, Chris, Shai, Caalab, and his special caregiver, Josh, who took extra special care of his great grandpa; his sister-in-law, Margee, and her granddaughter, Stasi, who did whatever we asked of them; and of course, his 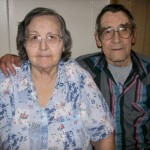 wife, Joann, who watched over him carefully, even though she had Alzheimer’s Disease, and was unable to fully understand what was wrong. There were so many others who showed him kindness and love in these last days, and their love and kindness was not lost to him…the doctors, nurses, and aides at Wyoming Medical Center; Dr Schoeber, Dr Novick, Dr Dowell, Dr Hussieno, Dr Wilkinson, and their kind staff members; the staff at Sharon’s Home Health Care, especially Deb and Sherry; Angie, his respite caregiver; and the nurses and aides and Shepherd of the Valley nursing home, which he loving called the Sheep Herders Place…he had some good times there. I want to thank each and every one of you. Your kindness to him will never be forgotten. We love you Dad, and we’ll always miss you.