One In Every Crowd 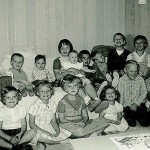 Getting a group of people together for pictures can be trying under the best of circumstances, and when you get a group of kids together…well, all bets are off. You don’t know if the kids will cooperate or if some will cry and some will laugh hysterically. You would expect that as the people get older, they might be able to control their emotions for just a second so the picture could turn out good, but, it seems there is always one in every crowd. In Bob’s dad’s family, that one that was a big cut up, was Bob. Maybe it was being the first boy in the bunch that drove him to goofiness, or maybe all those girls drove him crazy. Either way, he often ended up being the one with the funny face, because something struck him as funny at the most inopportune moment. When you think about it, it wasn’t such a bad thing…at least not this time, but I suppose that his mom wasn’t too amused at the look on his face.

Bob has always been one to laugh a lot, and most of the time it is very amusing…especially when he is laughing about a television show and you are not in the same room with him. When you hear that laughter from another part of the house, you have no idea what is so funny, but you laugh about it anyway. It was too hard not to. His laugh is a bit contagious. Still, the faces he often made as a child in pictures that were being taken, were probably irritating to his mom who wanted the pictures to be the best ever. Bob, like many little boys, just couldn’t keep a straight face, or sit still for that matter. It just wasn’t in him. 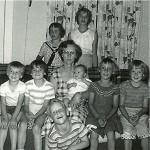 Looking at these pictures now from the viewpoint of having tried with my kids and grandkids, I can understand how she could be upset, but whether you wanted more serious pictures or not, you just have to admit that that one little funny face in that crowd of more serious ones did add a flavor to the picture that was all its own. He wasn’t trying to be bad, he was just wiggly, like boys are, and probably really wished they would just get this stuff done already so he could go back outside to play, because who wanted to sit still for pictures anyway. Yep, there is one in every crowd, and in that crowd, Bob was that one.