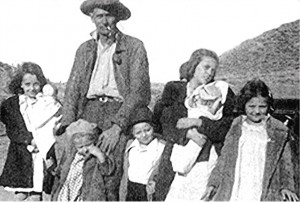 Some old pictures are classics, like a picture of your grandfather with only part of the nine kids he and your grandmother had. It’s strange to see Grandpa so young, and if your parent is in the picture, like mine is, seeing your mom or dad that young is really odd, unless you have seen a lot of those really old pictures, which I had not. Their children, Evelyn, Virginia, Delores, Larry, Collene, and Wayne (the baby being held by Evelyn), born in that order, surround their Dad. It looks to me like they were on one of their many outings, most likely rock hunting, which was a favorite pass time for the whole family, although Aunt Evelyn doesn’t looks so happy…probably because, Uncle Wayne is crying, or so it looks to me.

It must have been taken in the Fall or Spring, because everyone is wearing coats. I was looking at my mom, who is the little girl Grandpa has his hand on, and I thought it was interesting that her hat looked like some worn by little immigrant girls on the Titanic. That interests me, because my grandfather’s dad immigrated from Russia, and Mom reminds me of that era, but I could be wrong on that thought. Of course, my grandfather’s mom was born in the United States, and Great Grandpa Byer was gone by the time my mom was born, so any similarity is probably accidental. I wish I could have known him.

I think it is interesting that the children are recognizable to me, even my mom, who is actually looking down a bit. There is just enough of her face for me to tell without a doubt that it is my mom. We all think that children change so much from the time they are little to the time they are grown, but the more I look at pictures, the more I realize that it isn’t so. Those little faces are smaller, but the features are the same, and while some might look quite a bit different, many really don’t.