Not Your Tourist Horseman 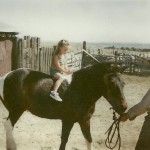 Having grown up in town, I didn’t spend much time around horses. I had a friend that lived out in the country, and rode a little when I went to her house, but I didn’t meet her until junior high, so I didn’t ride often, even though I found myself enjoying it when I did. My girls got to ride when we went to visit Bob’s grandmother in Montana, but that was just once a year, so they were no more experienced than I was. We were what would have to be like tourist horseback riders. I have been looking at some really old family pictures, and I have come to the 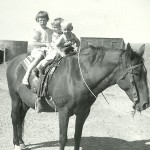 determination that our kind of riding would have been unacceptable in the days of the Old West.

When Bob was growing up, they spent more time around horses than we did, and so had the opportunity to ride more than I did. Still, of he rode when he was very little, he always had someone older on the horse with him. Most of the time you would see Bob with his sisters, Marlyce and Debbie. It was a way to make sure he didn’t fall off, because he would have probably tried to make the horse gallop or buck, if I know him. 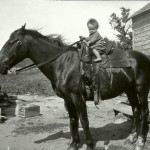 Apparently however, just a few short generations back, children were expected to be born with horse riding expertise, because I found this picture of Lester, my first cousin once removed on my Grandpa Byer’s side, and he was pretty little when he first was placed on a horse. Lester was born in 1920, and while I’m sure that he didn’t do much riding in this picture, it did strike me as amusing that here he was being a grown up big boy and sitting on his horse all by himself. I’ll bet that by the time he was 5 years old or so, he was a pretty accomplished horseman too, since he had such an early start. Even if he wasn’t an expert, my guess is that he certainly was not a tourist horseman…like me.