A Day For Remembering 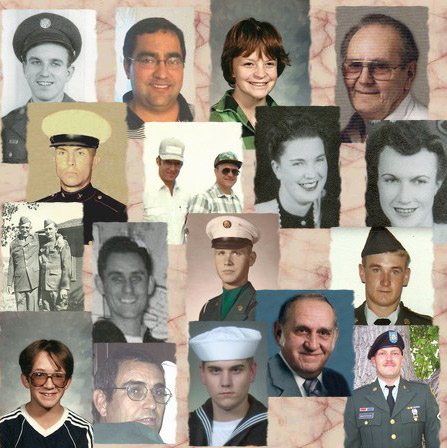 As is the case in most families, we have a number of heroes, both living and deceased, in our family. Memorial Day was originally set aside as a day to remember our military heroes. It has evolved into a day to remember those loved ones who have left us too…even if they weren’t in the military. I know there are those who have served that I am unaware of, and I first want to thank every member of the military past or present for their brave service to our country. Freedom isn’t free, and it was your dedication, bravery, and sacrifice that have made it possible for us to enjoy our freedom.

My grandfather and my great Uncle Ted both served during World War I. My dad , Uncle Jim Wolfe, and Uncle George served during World War II. My Aunt Laura and Aunt Ruth also helped during the World War II by working in the shipyards welding ships…a man sized job that was being handled very well, but a group of outstanding women. Others in the military were my Uncle Larry, Bob’s Uncle Eddie and Uncle Butch, my cousins Larry, Greg and Michael, Bob’s cousins Sheila and Pat, Bob’s brother Ron, Bob’s brother-in-law Lynn, and my nephews Rob and Allen.

Whether our military men and women served in wartime or peacetime, doesn’t matter. It takes great bravery to even sign up for the military, because you never know when war can break out and you will be given the call to action. Our military men and women sign up not only to fight if necessary, but to give their very lives as a sacrifice for others. Their everyday life, the places they live, the job they have, and the hours they work are all things that they give up control over. Many have missed the births of children, wedding anniversaries, and family birthdays, because they were far away from home serving their country. The things we take for granted that we will be able to attend, they know with certainty that they will not be able to attend.

Such sacrifice…such selflessness…such dedication!! These are all a part of the very makeup of these individuals, and something many of us never give any thought to. These people turned a part of their lives over to their leaders, in order to make our homeland, and the countries of other people a safer place to be. They fought for people they didn’t even know, while leaving their own loved ones behind to answer the call of duty. Today is Memorial Day, and I want to thank these, and all our military men and women for your courage…your selflessness…your strength…and your dedication!! God bless each and every one of you!!