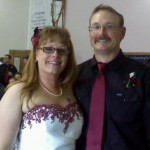 When Rachel married my brother-in-law, Ron, it was the beginning of a new life for her…many changes were coming, including some that were impossible to prepare for. As you begin married life, you expect certain changes, such as moving, having children, or as is the case in this marriage, adding a step-dad to a family in which the children are already there, and down the road, becoming grandparents. Still, some changes are very unexpected.

Ron is the youngest of my in-law’s children…in fact, he was born 18 years after their first child, his sister Marlyce. That said, when he married Rachel, she was instantly moved into an ongoing family caregiving situation, due to her new mother-in-law’s Alzheimer’s Disease, and her new father-in-laws, COPD and Emphysema. That is a lot to walk into for a 35 year old woman. Of course, she wasn’t the first line caregiver, but as we all know, when it comes to caregiving…it takes a village, and every person is important, right down to the children. The great thing about Rachel is that she can be counted on to come and help out with anything I ask, whenever he job allows. She also has a tendency to stop by, out of the blue, with lunch and just to visit our in-laws. It is a very sweet thing for her to do, and one for which we are all grateful.

Rachel has a daughter, that she had early in her adulthood. Cassie is quite a bit older that her two half-brothers, Riley and Tucker. Cassie actually got married on June 2, 2010, 10 days before Rachel and Ron. Before long Cassie would find out that she was pregnant, and due on August 3, 2011. Early on in the pregnancy, the doctors found out that something was wrong. This is a time when a girl really needs her mom. While Rachel lived in Casper, 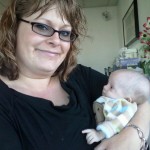 and Cassie in Powell, Rachel quickly went into action. Prayers were requested from anyone who knew how to pray, and Rachel immediately began to encourage Cassie and her husband, Chris. On July 3, 2011, one month prematurely, little Lucas Rae was born. While he dose have Down’s Syndrome, and had to have heart surgery, he is now a healthy 8 month old baby boy, who is as sweet as he can be, and who definitely loves his grandma.

Rachel’s life has taken many twists and turns, but because of the awesome person she is, it has all turned out to be a wonderful life. Happy birthday Rachel!! I’m so happy to have you for my sister-in-law. Love you!!