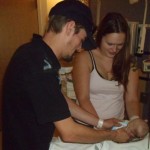 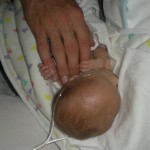 My sister-in-law Rachel’s daughter, Cassie, and her husband Chris, gave birth to a baby boy named Lucas Rae exactly 6 months ago today. Little Lucas was not given good odds early on in the pregnancy. It all began shortly after they were told that they would have a son. Joy soon turned into concern as the doctors explained that baby Lucas was smaller than he should be at that point. It was determined that he had an intestinal blockage, a 1 in 8 million chance, that was causing him not to be able to absorb nutrients properly. They were also told that in addition to the surgery shortly after his birth to clear the blockage, he had three holes in his heart that would need to be addressed at some point. They were also told that it was likely that Lucas had Down’s Syndrome. It was a huge blow for a young couple to take, but they faced it head on, determined to win. Prayer requests were immediately sent out.

Cassie was due to deliver Lucas about August 3, but that was not to be. It was important to deliver him early so the blockage could be removed and he could begin to grow, but delivering him early also presented problems, given his small size. Still, the early delivery was the best option. So on July 3, 2011 at 11:51pm, Lucas Rae was born by Cesarean Section in Denver. He weighed 2 pounds 7 ounces and was 16 inches long…4 inches longer than the doctors expected…the first miracle. He was on only oxygen at that point because of immature lungs. They had to wait on the surgery because Lucas was having a little bleeding in his brain, but it was not a stroke or tumor…the second miracle.

Finally, the day came for the intestinal surgery. Lucas had gained a little weight, and the bleeding had stopped. The surgery went very well, and Lucas was soon on the way to much needed weight gain. About this same time they were told that one of the three holes in his heart had healed in its own…a third miracle. Finally Lucas was able to go home, weighing 4 pounds 9 ounces. His favorite place to be, other than in Mommy or Daddy’s arms, was his swing. All too soon, the time came to return to Denver for the heart surgery. After a successful surgery, Lucas was finally able to come home for good…a fourth miracle. He was such a “little trooper” through all of this as his Grandma would say. 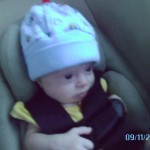 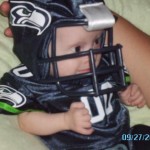 Today is Lucas Rae’s 6 month birthday…a day that the doctors weren’t sure would ever arrive, but God and the prayers of faith knew different. He is still pretty little, and looks a bit like a baby doll in some of his pictures, but he is happy and smiley, and much loved. While I, like most of his Casper family, haven’t had a chance to meet Lucas yet, we already love our sweet little miracle man very much.