Who Now Are Friends 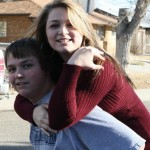 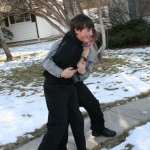 From the time they were little babies, my grandchildren have had Christmas pictures taken together every year. Those photo sessions were often not fun to say the very least. One or more of the kids always seemed to want nothing to do with one or more of the others. The instant the photo session started, so did the fighting and the inevitable headache. You could call it sibling rivalry or cousin rivalry, but whatever you want to call it, it was the pits. Well, last weekend was that time again, and we all expected the same old thing.

For many years, my granddaughter was certain that she would never love her brother. I kept trying to tell her that eventually she would like her brother and even have fun hanging out with him. Still she was certain that there was no way that would ever happen. Now, just a few short years later, they are friends, and I’m so happy to see it. I love watching them playing together. Really, it’s like they are saying, “Here we are, who once were enemies, and who now are friends.” That look that warms a grandmother’s heart. Watching them share a laugh and goof off together…well, it was awesome.

Christopher and Josh didn’t fight in the same way that Shai and Caalab, but I suppose that is just because they were both boys, and two brothers fight differently than brother and sister do. Still, I remember a number of times when Kevin had to get after his boys for fighting too. Each one felt like he needed to take matters into his own hands if his brother got out of line. Now that Chris is working, Josh is starting to miss his brother quite a bit. He is thinking about the fun they have had through the years.

After the traditional Christmas pictures were done, we turned the kids loose to go 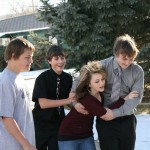 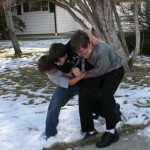 outside and create a little different Christmas picture, and I have to say that it is those pictures that have been a big surprise. The kids played and laughed, threw snowballs, tossed each other into the snow, chased each other…but they didn’t fight. They who once were enemies, and they who now are friends. My grandchildren, who have made a transition…that first real step into adulthood. I was amazed, pleased, and definitely in awe of the change.