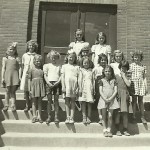 I was looking through some of my mom’s old grade school pictures, and the names on the back. I find myself amazed at the number of names that are familiar to me for one reason or another. I have lived most of my life right here in Casper, having moved here when I was 3. My mom has also lived here most of her life, with the exception of the first 6 years of her marriage, so I guess it stands to reason that there might be a name or two from her classmates that might have stayed on in Casper.

It was just somewhat unexpected I guess, although I don’t know why. Some names, of course, were common enough so that I wasn’t absolutely sure, but many were names I had heard…from my friends. One is the mother of a girl who was my best friend in junior high. Another was the mother of someone who was a client of mine a few years ago. Another was the same last name as a mortal enemy, later turned friend from junior high. And there was one who was related to someone I bowled with.

A name that really amazed me, although it probably shouldn’t have is most likely the daughter of a man who developed part of this town, because there is a street named after her, and again the name is not a common name and the street carries both her first and last name, so what are the odds that she isn’t the same girl? Pretty slim I’d say. 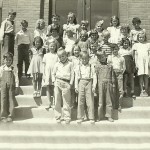 As I looked at the faces…kind of searching for a face that looked like one I use to know…it occurred to me that I was really looking at something very special. I was looking at the past, and the past had met my past, and who knows, maybe that past might just meet the future, because who knows how many of the children of those kids have stayed on here in Casper. It is totally possible that while the names might change due to marriage, many of the families remain the same, and my children’s children might go to school with the great grandchildren of classmates of my mom’s…as the past meets the future.

4 Responses to Past Meets Future