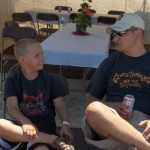 Such is the case with my grandson, Caalab. Now Caalab is definitely his daddy’s boy. He looks and acts so much like Travis that it is like looking at a picture of Travis, and I’m sure that when they look at each other, it is like looking in a mirror. And their personalities…well, anyone who knows them can tell you that Caalab definitely got his personality from Travis. Wow…it’s like they rehearsed it or something.

But, sometimes when I look at a picture of Caalab, he reminds me so much of his mom that it astounds me. He smiles like Amy smiles, and when they are both deep in thought, they look so much alike. I have pictures of them as little babies, that could almost pass for the same child, and yet I have seen pictures of Travis as a young boy that are totally Caalab.

It isn’t unusual for a child to look totally like one parent or the other, or be so much a mix of the two that the child doesn’t really look like either of them, but to look so much like his dad, and yet sometimes look so much like his mom, seems unusual to me. Of course, I must say that with Caalab, it is pretty much in a look here and there, and certain situations that he is like his mom, because in most ways, 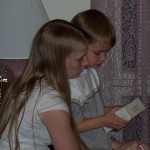 I have never seen a boy more like his dad!! It’s almost uncanny.

I guess children are their own people, built from the DNA of their parents, and taking from both sides, but sometimes there is enough alike in them to take you by surprise. And when the similarities come so early on in life, you just can’t believe that it is the child copying the parent. Caalab has always been a jokster, as has Travis, but when Caalab started telling whole jokes at 4 or 5, and never missing the punch line…I had to remind myself that he couldn’t be reading them. It was just Caalab being just like his dad. That is one place where he is definitely all Travis.