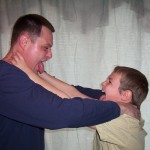 When I first met Travis, the man who would become my younger son-in-law, he was still a boy in high school. He would tell me later that he was the class clown, which I would say I have to believe. Travis doesn’t even have to think about saying funny things. They just flow out if him. I don’t mean to say that Travis has nothing serious to say, because he does. He is a hard working man, who is dedicated to his family. He has been a good husband to my daughter, Amy, and father to their children, and in the 16 years that they have been married, he has brought much joy to our lives.

But, one of his favorite things to do is to laugh and make others laugh, and that isn’t a bad thing. I marvel at his quick wit. I have often noticed, when I would stop by their house, that he seems to have the kids giggling a lot about some little thing he said or did. He can take just about any situation and make it funny. There is a lot to be said for having a home filled with laughter. It is something we should all strive to have. That is a trait he has also passed down to my grandson, Caalab. They are always goofing off and teasing anyone who happens to cross their path…usually Caalab’s sister, Shai. Yikes!!

Travis is also a talented musician, and plays in a band. Now mind you, I’m a country music fan myself, so the music he plays is not exactly my style, but I am proud of what he has accomplished. He is truly a man of many talents. He’s program director, DJ, advertising voice for commercials…basically jack of all trades for the local radio station, a job which is perfect for his personality.

Today is Travis’ birthday, and I’m quite sure it will be a day filled with joking. Maybe…just maybe today, someone will pull a good one on him. Happy birthday Travis!!