How I Met My Husband 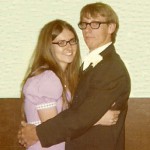 I met Bob when I was still in high school, though not in the way you might expect. We didn’t meet in school or at a game. We met at Kmart. We didn’t just casually meet there, I was working there, as was his sister, Debbie. I worked in the Millenary department…handbags, belts, sunglasses, accessories, and wigs, and I had a display near the delicatessen where Debbie worked. In fact, my display of winter gloves and hats was how I met my future sister-in-law. Every evening when I worked, I had to go over an straighten that display, and believe me it needed it after a day or even an hour of people going through it. When people would look for glove and hats, they would dig clear to the bottom to see if there was a set they liked more, nearer to the bottom. The display usually needed to be straightened twice in a shift. When I went to straighten the display, my future sister-in-law, Debbie and I would talk if it wasn’t too busy.

One day, Bob came in to take his sister on her break, and I happened to be there straightening the display at the time. She introduced us, and then they went to take her break. Bob took to coming by for Debbie’s breaks more often after that, but I didn’t know that it was because he wanted to get to know me…not right away anyway. Bob was a little bit shy, and didn’t know exactly how to approach me, so he and his friend, Paul would come in, dig to the bottom of my glove display and flip the whole stack of gloves upward, messing them up. I, of course, had just straightened them, not two seconds earlier. They would only do that if I was there straightening them. It was his way of being playful…and it was cute, after all.

Finally, he got up the nerve to ask me out…and wouldn’t you know it…I couldn’t that night. Being shy, as I said, Bob thought that was my polite way of saying I didn’t want to go out with him. That, of course, couldn’t have been further from the truth. Nevertheless, the guys decided to see if I would go out with Paul. When Paul asked, I did turn him down, because I wanted to go out with Bob. They thought that I didn’t like either of them, and pretty much dropped the subject…but, not coming up to mess up my display. I couldn’t believe that

Bob didn’t ask me again. Debbie and I talked about it, and she told me that he was shy. It was a big dilemma.

Finally, I had to solicit Debbie’s help. She kept talking to Bob to tell him that I did like him and I wanted to go out with him. It was no easy task. Bob had convinced himself that I didn’t. Eventually though, Debbie talked him into asking me out one more time. Of course, I said yes, and the rest is history…with a little bit of a twist. While I’m sure a lot of people have met their spouses at work, I still think ours is a unique situation. When people ask me how I met my husband, I still say that I met him at Kmart, but I playfully add that he was my Blue Light Special. I don’t think I could have found a better deal anywhere.