Christopher was the first in a series of grandbabies that I couldn’t wait to get. Moments after his birth, my daughter Corrie said, “We made it mom!!” I said, “Made what?” She said, “You are a grandmother before you are 40.” I had always told the girls that I wanted to be a grandma before I turned 40, because I was so ready for that next step in life. And, yes indeed, we made it…twice. I was 39 when Christopher was born, and didn’t turn 40 until that April.

Christopher was, nevertheless, a bit of a “culture shock” for me, in that I had been raised with 4 sisters (no brothers) and then I had 2 daughters (no sons) and suddenly there was this very different kind of child in my life. Christopher is all boy. He is into sports, cars, and of course, girls! As a boy he was rough and tumble, and filled with
energy. I wasn’t used to that type of personality…but he changed all that. His 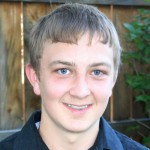 favorite sport is football. He loves to take out the quarterback…and it doesn’t make any difference to him how big the guards might be. He simply has no fear!! Girls are so different that that, so I was quickly initiated into a new world. Soon, I was very used to the antics of boys, who I have learned are very different from girls, indeed.

Now, my first little grandbaby is turning 15 years old. He is tall and strong, with a deep voice like his dad’s…just one more thig that I have to get used to. That little boy voice is gone forever, as is the little boy, but he has turned into a wonderful young man, who makes his grandma and grandpa very proud!! Happy Birthday Chris!! We love you very much!!